Policies have consequences. Certainly, we’ve seen economic impact in the 2010 decision to halt deepwater drilling in the Gulf of Mexico and the subsequent slow pace of oil and natural gas permitting. A new study released by API underscores this:

The effects of the deepwater drilling moratorium and subsequent permit slowdown have already reduced total capital and operating expenditures in the Gulf of Mexico by a combined $18.3 billion for 2010 and 2011 relative to pre‐moratorium plans. Since April 2010, eleven deepwater drilling rigs have left the Gulf of Mexico. These rigs have gone to countries such as Brazil, Egypt and Angola. Through 2015, the investment in other regions instead of the U.S. associated with these rigs is estimated to be over $21.4 billion including drilling spending and associated project equipment orders, even accounting for the portion of equipment that will likely be manufactured in the United States. As a result of decreases in investment due to the moratorium, total U.S. employment is estimated to have been reduced by 72,000 jobs in 2010 and approximately 90,000 jobs in 2011.

Let those numbers sink in. More than $18 billion in capital and operating expenditures means lost investment, lost economic stimulus from an industry that’s a proven supplier of stimulus. Deepwater drilling rigs departing for places where they can be put to work means more lost investment. The job losses are remarkable, more than 160,000 over nearly two years. API President and CEO Jack Gerard:

“The economic impacts of the moratorium are still being felt. We’re not doing what we should be doing to help meet our nation’s energy needs, deliver revenue to our government, and create jobs.  This is not just hurting people in the Gulf, it’s hurting people across the country.”

Key findings in the study prepared by Quest Offshore Resources: 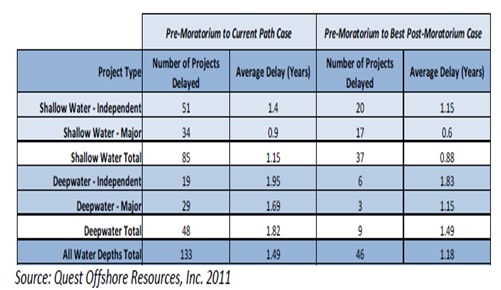 “Energy policy needs a course correction. Our industry has a vision of an energy future that will support and create millions of jobs and strengthen our energy security.  It is based on smart, realistic deployment of all of America’s energy assets, including our ample supplies of oil and natural gas.”