From where we sit, a new White House report that gives substantial credit to natural gas production for recent growth in U.S. manufacturing looks pretty darn good. In this economy, lots of Americans surely would agree.

The report, “Investing in America: Building an Economy That Lasts,” notes the loss of 3 million manufacturing jobs from 2001-2007 – but then the addition of 334,000 of those jobs the past two years. That second number is due in no small part to the production of natural gas from shale through hydraulic fracturing. The White House:

“The discovery of new natural gas reserves, such as the Marcellus Shale, and the development of hydraulic fracturing techniques to extract natural gas from these reserves has led to rapidly growing domestic production and relatively low domestic prices for households and downstream industrial users. Appropriate care must to be taken to ensure that America's natural resources are extracted in a safe and environmentally responsible manner with the safeguards in place to protect public health and safety. Provided these precautions are taken, the potential benefits to the U.S. economy are substantial.”

We agree, and we like their chart showing the surge in natural gas production: 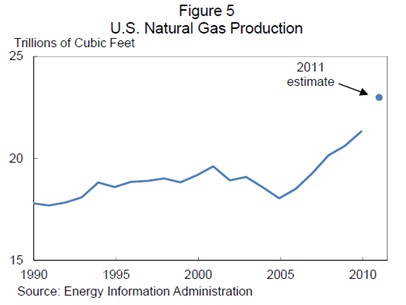 The fact is lots of people have been extolling the vastness of America’s shale natural gas and oil reserves and the economic benefits of tapping into them – already being realized in North Dakota, Pennsylvania and other states.

A recent IHS Global Insight study showed the shale natural gas industry supporting 600,000 jobs, projected to grow to nearly 870,000 in 2015 and more than 1.6 million by 2035. The boost the shale gas revolution is giving to U.S. manufacturing is on the order of 1 million new jobs by 2025 because of affordable energy from shale and demand for products used to develop America’s shale resources. What can we say: It’s good to have the White House onboard:

“By keeping domestic energy costs relatively low, this resource also supports energy intensive manufacturing in the United States. In fact, companies like Dow Chemical and Westlake Chemical have announced intentions to make major investments in new facilities over the next several years. In addition, firms that provide equipment for shale gas production have announced major investments in the U.S., including Vallourec’s $650 million plant for steel pipes in Ohio.  An abundant local supply will translate into relatively low costs for the industries that use natural gas as an input. Expansion in these industries, including industrial chemicals and fertilizers, will boost investment and exports in the coming years, generating new jobs.” (Click here for more on the remarkable story of manufacturing/industrial rebirth from Ohio.)

We agree that developing America’s shale resources has to be done safely and in an environmentally responsible way. Industry is on it. It has developed operational guidelines and is committed to transparency and working with state officials to develop regulatory regimes that work.

Now, if folks over at the White House would just see the light on the Keystone XL pipeline…