Great post by the American Enterprise Institute’s Steven Hayward (similar version posted on Powerline), breaking down a recent study of government revenues from oil and natural gas leases on public lands, onshore and off. The study is important because it refutes the claim that energy companies don’t pay their “fair share” for the right to develop federal lands.

Interestingly, as Hayward notes, the IHS-CERA study was requested by the Interior Department’s Bureau of Land Management (BLM) after another government study suggested exactly that. A 2008 report by the Government Accountability Office (GAO) said the federal government wasn’t collecting as much from oil and natural gas production on public lands as it should – ranking 93rd out of 104 fiscal systems around the world and losing between $21 billion and $53 billion in potential revenue. Red meat for the “fair share” theorists!

Only it’s not so. The BLM/IHS-CERA study simply blows away the GAO report. Hayward:

It becomes quickly apparent from the IHS-CERA report that the GAO’s analysis of this extremely complicated arena was superficial and inadequate, and that the government makes out quite well, no matter how you define “fair share” that is supposed to be the guide of oil royalty and tax policy. In fact, if you consider the government take as a proportion of the cash flow from oil and gas projects, the government typically nets more than the oil or gas-producing company does.

Here’s how well:  IHS-CERA found that on average, the federal government gets 64 percent of the cash flow from Gulf of Mexico oil leases. Although there are variances from lease to lease, onshore and offshore, “in no case does the government receive less than half the cash flow,” Hayward writes. He cites natural gas leases in Wyoming, where the government take ranges from 50 percent to 73 percent. 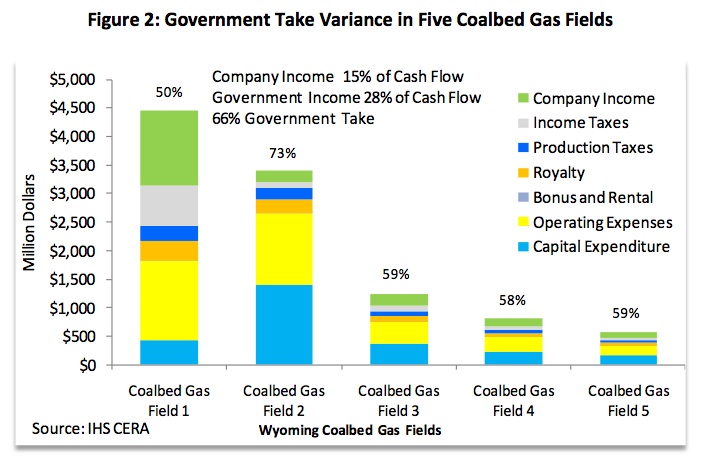 Here’s another chart from Hayward’s post, showing that when oil prices spike as in 2008, so do government revenues, boosted by “signature bonuses,” in which energy companies buy rights to a lease in advance: 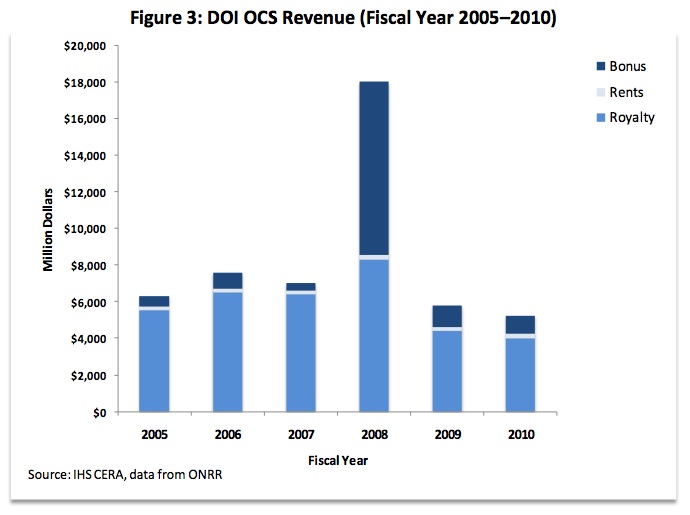 Again, the importance here is knocking down the myth that oil and natural gas companies aren’t paying their “fair share” for developing federal leases – just as some argue companies don’t pay their “fair share” of taxes overall despite the fact the industry pays more than $86 million every day to the U.S. Treasury in rents, royalties and income taxes. The fact is, compared to what other governments around the world are collecting, the United States ranks high. IHS-CERA:

A ranking of fiscal terms based on all four variables puts all U.S. federal jurisdictions in the top half of the index, which indicates high government take, low (internal rate of return), low (profit-investment ratio), and highly regressive fiscal terms. The (Gulf of Mexico) shelf appears to be least favorable to investors among the U.S. jurisdictions, ranking in the top 10 percent, with Wyoming gas and the GOM deep water ranking in the top 35–50 percent range.

IHS-CERA’s conclusion is that when compared properly with the royalty and tax systems of 29 other nations, only Venezuela extracts a higher take from oil and gas production than the United States. Nice company we’re in.