Monday the White House had a blog post up saying:

“While profits soar, oil companies are receiving about $7,610 a minute in tax breaks.  That’s $4 billion a year of your money.”

During the latest economic downturn, when industries were shedding jobs and limiting spending, the U.S. oil and gas industry was doing the exact opposite.  Over the past few years we supported around 9.2 million U.S. jobs and, when given the opportunity, invested hundreds of billions of dollars into the United States to find new resources and generate the energy that American’s need.  So despite doing everything the Administration looks for in an industry – create jobs, invest in the United States, innovate – it does not appear to be enough.  The false argument now being made is that the industry is somehow not paying its fair share.

First, let’s put profit in perspective.  The oil and gas business generates revenue from its worldwide activities – however, it costs a huge amount of money to be successful.  That is why the real analysis for profits should be profit margin – how much profit does the industry earn on its sales.  In that light, during the most recent quarter the profit margin for “Major Integrated Oil and Gas” was 6.2%, which ranked 114th out of 215 industries.  So, I guess if profitability targets an industry, look out “Publishing – Periodicals” at 51.7%!

Second, let’s look at the claim that the industry is getting “tax breaks”.  These “breaks” are essentially deductions that the industry, along with many other industries, are eligible to claim.  They are not tax credits (which reduce taxes dollar for dollar) or grants from the government.  They are tax deductions for business investments that will generate tax revenues in the future.  Unlike the case of credits or grants, the government will still be paid the full amount of tax owed on our operations.

To illustrate let’s take a look at one of the deductions the president proposes to change, that for Intangible Drilling Costs (IDC). Currently large integrated oil companies can currently deduct 70% of their IDC costs over the first year and the rest over the next four years, under the president’s plan companies would have to spread the deduction over time – let’s say seven years. So for a well costing $5,000,000 the deduction schedules look like this: Under both plans the amount being deducted will be the same, which means the taxes ultimately being generated would be the same.  The industry however uses the cash flow from the deduction to invest in equipment and jobs as they continue to drill and develop energy here in the United States.

Finally, let’s put the $7,610/minute point into perspective.  The oil and gas industry pays substantial amounts to the federal government in rents, royalties, bonus payments and, oh yes, taxes.  In total, these payments have been around $86M/day or $59,000 a minute!  An over 700% return on their “investment”.  So, at the end of the day, it is not the government supporting the industry, but the industry supporting the government.

Additional taxes or royalties may raise this amount in the short term, but it will eventually drive away investment.  This shouldn’t be surprising, by being able to reasonably recover costs, companies are able to drill more, and drilling more produces more American energy and more revenue for the government, not to mention more jobs.  The president’s plan will actually produce less, less, and fewer.

So while the White House tries to shape the numbers on the industry, the real numbers are as follows: 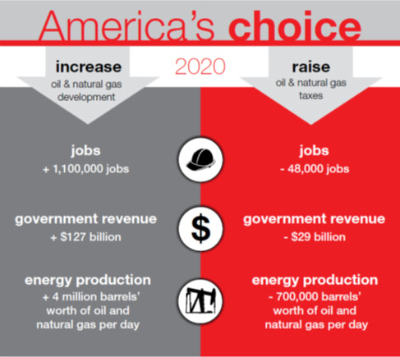