The White House had a post up last week with some numbers on production of oil and natural gas on America’s public lands and offshore waters. They want the facts to “speak for themselves,” so let’s chart their numbers over the past six years: 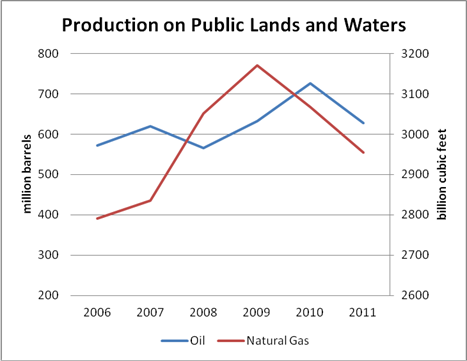 "We know that production levels will fluctuate from year-to-year based on market conditions and industry decisions."

Of course the same is true for private lands where production levels are up.

"It also reflects the fact that the nation battled a major oil spill in the Gulf of Mexico in 2010."

An interesting point, given that 2010 production is the peak for oil. And it doesn’t explain the projected declines this year and next: True if you include private lands, but on Federal?  Let’s look at the last three years part of their dataset. Not sure “rising” means what they think it means.

Note:  An earlier version of the first and third charts above showed oil production as “billions” not “millions,”  we regret the error.  Sharp readers have also noted that the some of the numbers do not appear to match with EIA reports.  For this post we were just charting the data in the White House blog post mentioned.  We didn’t want to change the White House numbers lest we appear to be skewing their analysis to fit our commentary.