Reuters reports that eight deepwater drilling rigs are expected in the Gulf of Mexico this year, which would bring the active deepwater contingent to 29 – just short of the number before the 2010 Macando accident. While that will be a positive step, here are some reasons to hold off popping the champagne corks:

But here’s the most important point missed by the report: The lost Gulf production caused by the moratorium – the difference between where production is now and where it was forecast to be by government officials a couple years ago.

According to the Energy Information Administration, Gulf production fell from 1.55 million barrels per day in 2010 to 1.32 mb/d in 2011, and was estimated to fall to 1.23 mb/d this year. That’s a 21 percent decline. But look at EIA’s 2010 forecast. Two years ago production was predicted to reach 1.76 mb/d this year. The difference between that forecast and the most recent Gulf production estimate is a whopping 30 percent.

Here’s a chart we’ve used before to illustrate the gap: 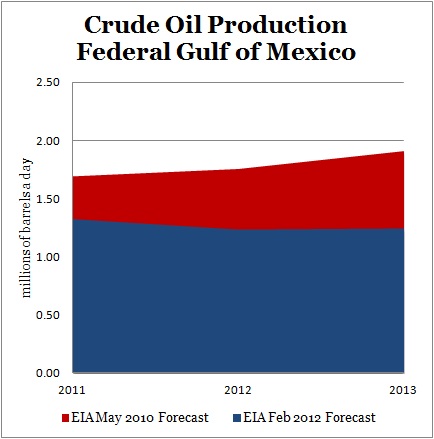 “We should not forget that the (December 2011) Quest study demonstrated that without the moratorium, the rate of drilling was projected to increase, not just stay flat. We remind those following this issue that the baseline they should compare current levels to is the previously planned activity level, not just the activity level at the time the moratorium was put in place.”