In an Election Year, Time to Talk Energy

Just a thought, but how great would it be if one of this fall’s presidential debates focused solely on energy issues?

Past presidential debates have discussed the economy and jobs, national security and foreign policy, and of course all of those are important. Yet, when you think about it, energy is the nexus where all come together.

Energy runs our economy, literally, and the quest for it supports millions of jobs and could create hundreds of thousands more. Our need for reliable, affordable energy figures prominently in national security and foreign policy decisions. An America that meets most or all of its energy needs here at home would be safer, its prosperity less vulnerable to geo-political developments.

So, when the people who decide the topics for this year’s presidential debates get together, maybe they might consider devoting one evening for a thorough energy discussion. Exelon’s James Connaughton, former senior energy and environmental policy advisor in the Bush administration, talking this week about energy as an election-year issue:

“This is the first election in a long time where energy is in the top five list – not surprisingly because of the immediate connection to jobs and economic growth. In the past, when jobs and economic growth weren’t at the forefront, maybe we weren’t thinking about energy so much. But I’m amazed – both the Obama campaign and the Romney campaign, they’re spending a lot of time talking about energy and visions of energy.”

There’s plenty to talk about. This week API presented a series of platform recommendations to the two political parties that get to the heart of what America’s energy future could look like. The planks: Efficiency and Timeliness in Permitting

As this chart shows, delays in government leasing and permitting are a contributor to the trend lines in oil and natural gas production in federal onshore and offshore areas: 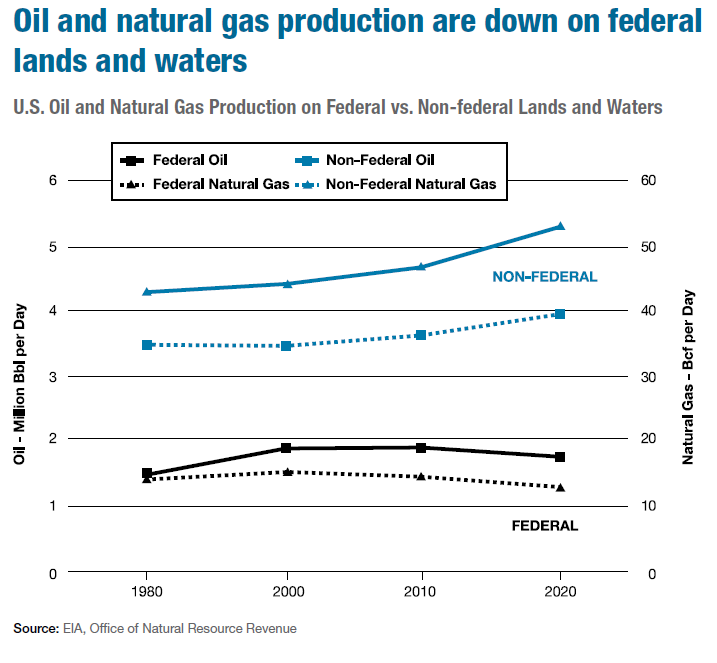 “A political and policy commitment to a developing our domestic oil and natural gas resources will provide not just energy security, but financial security for millions of Americans. … Through the Vote 4 Energy campaign, we have outlined our vision for a future where people and the economy benefit with hundreds of thousands of new jobs, increased investment in America and billions in new revenues for government while bolstering national security.”