A Need For Reality-Based Energy Policies

One of the biggest challenges in planning for our energy future is that opponents of oil and natural gas are quite unwilling to acknowledge the reality of our energy supply and demand.  Two examples: First, from a new Sierra Club video (ably rebutted in full by Oil Sands Fact Check here):

And second, from a Globe and Mail article featuring Jeremy Rifkin, a Maryland-based author and consultant:

Now for the reality: The government projects oil and natural gas will supply 57 percent of our energy in 2035: 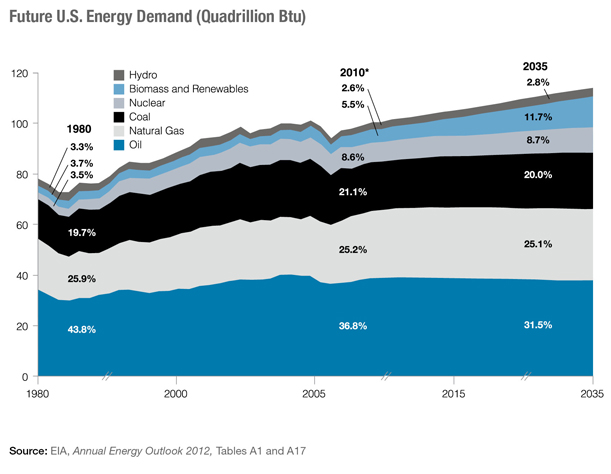 And 52 percent of the world’s energy that year: So yes, moving America “beyond oil” would be “that difficult,” and yes, we need to plan to use carbon-based energy well beyond Rifkin’s window. That isn’t to say that we shouldn’t pursue alternative forms of energy. Oil and natural gas companies are leading the way in that regard. But there are simple realities. As Dr. Arun Majumdar, director of the Energy Department's Advanced Research Projects Agency-Energy, noted last year:

Which is why we need a real all-of-the-above approach to energy, one whose strategies and policies acknowledge our energy reality. Such as these:

Each of these will help create American-made energy to ensure we have the resources we need for a secure future.