The Offshore Oil and Natural Gas Lease Sale We Need

Tomorrow’s scheduled Central Gulf of Mexico oil and natural gas lease sale in New Orleans will be the first in that area since March 2010. Setting aside for a moment the two-year gap in exploration and development caused by two years without new sales, tomorrow’s auction is important to America’s economic and energy security.

Unfortunately, the two-year gap is real and has real impact. Because it takes seven to 10 years for an offshore lease to start producing oil or natural gas, there’s a gap in the development timeline. It’s like a vintner who skips two years growing grapes; at some point in the wine-producing process there’ll be a lean vintage year. Here’s a chart that shows the stages and time requirements of offshore development: 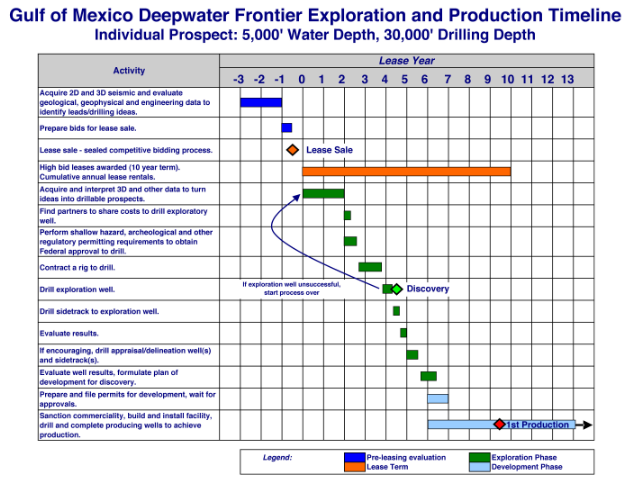 A couple of other points about tomorrow’s lease sale, underscored by API’s Upstream and Industry Operations Director Erik Milito during a conference call with reporters: While it’s good the Bureau of Ocean Energy Management is holding the sale – which will generate significant industry interest – the areas in the Gulf being offered aren’t new, emphasizing the administration’s restricted approach to developing America’s energy resources. Milito:

“Every lease sale is important, but more important for our energy future than any individual sale is our nation’s broader energy policy framework. That, unfortunately, has been inadequate. The administration’s proposed five-year offshore leasing plan for 2012 through 2017 … would limit offshore development to where it historically has always been – parts of the Gulf of Mexico and offshore Alaska. It would restrict opportunities when it should be expanding them. It would not help prepare us well for our energy future.”

If the energy goal is to reduce oil imports, then tomorrow’s sale reflects a short-sighted vision that will struggle to take us there. Good news: It doesn’t have to be that way. America is energy-rich, with the resources, financial wherewithal and technological know-how to substitute domestic production for much of what we get now from foreign suppliers. It simply takes the right plan, the right approach.

With the right access policies – capitalizing on tight oil and shale gas discoveries, our offshore potential and increased supplies from neighbor and ally Canada – we could see 100 percent of our liquid fuel needs met by 2024, a little more than a decade away. Milito:

“We can do it safely. Industry continues to demonstrate a commitment to continuous improvement in operations to make things safer for our personnel, the public and the environment. In the offshore the industry, working closely with government, has enhanced its ability to prevent, contain and respond to a spill.”

Energy development is a long-term process. Limited vision and action sows seeds for the future. Milito:

“The proposed Department of Interior five-year plan is insufficient, and each year we implement it we will fall further behind what we really should be doing. The administration ought to begin working on a new plan immediately.  … Maintaining the status quo won’t work. Existing wells are continually depleting and need to be replaced with new discoveries. It is also important to open new areas for leasing so that industry can use new exploration technologies that will increase production.”