On the Ogallala Aquifer – The Expert and The Activist

Interesting piece in the Washington Post – detailing the sharp differences over whether the Keystone XL pipeline will impact the Ogallala aquifer as it crosses Nebraska.

On one side: activist Jane Kleeb, who believes the pipeline would endanger the primary water supply to the Great Plains. On the other: University of Nebraska professor emeritus James Goecke, who has studied the aquifer for more than three decades.

The Post notes that Kleeb is a “savvy activist” who moved to Nebraska in 2007. Goecke is a hydrogeologist, the Post reports, who has been “measuring water tables in Nebraska’s ecologically sensitive Sand Hills region since 1970 …”

Kleeb tells the newspaper that if the Keystone XL leaked, “oil could quickly seep into and through the porous, sandy soil.” The Ogallala is a “very fragile ecosystem, literally made of sand,” she says. “To have a pipeline crossing that region is just mind-boggling.”

Mind-boggling to Kleeb, perhaps, but the fact is that thousands of miles of other pipelines already cross the Ogallala (in pink) in Nebraska, as shown below: 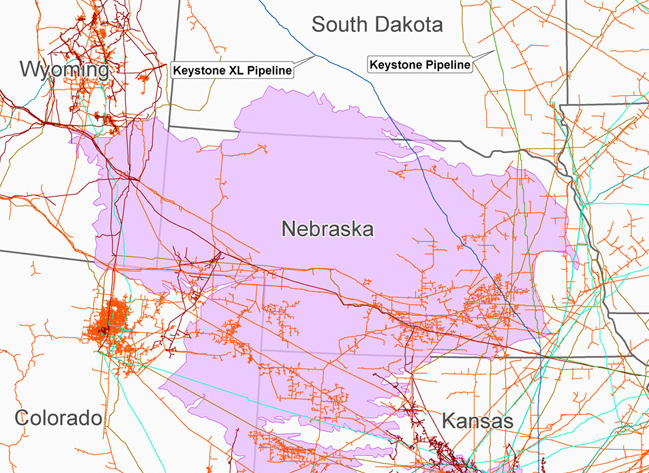 According to the Post, Kleeb cites University of Nebraska civil engineering Professor John Stansbury’s projection that over a 50-year time span the Keystone XL would have 91 leaks that “could potentially put 6.5 million gallons of tar sands oil in the Ogallala aquifer and essentially contaminate our drinking water.” Yet, later in the piece, Stansbury concedes that his projection might be “overstated” and then refers to Goecke as the “number one expert” on the Ogallala aquifer. It’s not hard to see why Stansbury has such a high opinion of Goecke. The Post:

"Goecke says that many people have the wrong impression about the danger a pipeline leak would pose to the Ogallala. It’s not like dropping oil into a lake, he says; remember, the aquifer is more like a sponge. He said people 'were concerned that any spill would contaminate and ruin the water in the entire aquifer, and that’s just practically impossible.' To do that, the oil would essentially have to run uphill, he said. 'The gradient of the groundwater is from west to east; 75 percent to 80 percent of the aquifer is west of the pipeline, and any contamination can’t move up gradient or up slope,' he said."

"'Secondly,' Goecke added, 'any leakage would be very localized. . . . A spill wouldn’t be nice, but it would certainly be restricted to within a half-mile of the pipeline.' He predicted that the varied layers of fine-grained seams of silt and clay would contain the flow of oil."

The Post finishes with Goecke in an ad he did (without pay) for TransCanada, the Keystone XL’s builder:

“'I’ve spent my career drilling holes to and through the Ogallala Formation. I’ve probably seen as much of the Ogallala as anybody,' he says on camera. 'There’s a misconception that if the aquifer is contaminated, the entire water supply of Nebraska is going to be endangered, and that’s absolutely false. If people recognize the science of the situation, I think that should allay a lot of the fears.'”

Goecke believes TransCanada has built in the right precautions, the Post reports – plans to drill well beneath riverbeds, to put in thicker pipe at environmentally sensitive points and to monitor the project with state-of-the-art technology. The existing Keystone pipeline, completed last year, has 16,000 data points that are refreshed every five seconds. The Post:

"Quickly detecting a pressure drop that could indicate a leak is essential; the flow rate on the existing pipeline is about 410 barrels a minute, and the capacity of the new line would be about a third bigger. The company says that it can isolate a piece of pipeline and shut off the flow of oil in just 15 minutes."

"Indeed, the new route has not mollified Kleeb, who says it still runs over ecologically sensitive areas. Kleeb also doubts political arguments that the pipeline will enhance U.S. energy security; she says that much of the crude in the line would be refined in Texas and sold overseas: 'I also don’t like politicians saying we have to be ‘energy-independent’ and then allow an export pipeline to cross our land and water while pretending it is helping make our country energy-independent.'"

The misinformation here is nearly as big as Nebraska’s Sand Hills. Crude oil from neighbor and ally Canada – vs. oil from less reliable sources – will absolutely make America more energy secure. With the right policies – strengthening the U.S.-Canada energy partnership and increasing access to domestic resources onshore and offshore – the United States could see 100 percent of its liquid fuel needs supplied by North American sources by 2024. We’ve debunked the oil-for-export canard here and here, but here’s the key stat: 99.7 percent. That’s how much of the U.S. crude oil supply was consumed in the U.S. in 2011. TransCanada is not investing billions of dollars to build a pipeline to run from Canada to the US Gulf Coast just to export crude oil.  If anything, Canadian oil sands delivered by the Keystone XL would make up for an expected decline in heavy crude imports from Mexico, Venezuela and Ecuador, according to the U.S. Energy Information Administration.

Going back to Goecke, the hydrology of the Ogallala, the technology TransCanada will deploy with this project and the jobs and energy the pipeline will support make the Keystone XL a “no brainer,” as Canadian Prime Minister Stephen Harper has said. Except to activists like Kleeb. The Post:

"'Jane Kleeb’s big political argument was ‘protect the aquifer,' said a longtime Republican Party activist, who asked for anonymity to protect his business relationships. 'You’ll get a sympathetic ear for that from people living in Lincoln or Omaha. Now with new route she’s still against it, which means she’s really just against fossil fuels.'”