Ridiculing a New York Times editorial blog is like shooting unusually large fish in a barrel, but this one from last Friday is so fantastical and extreme that a commitment to an honest debate on energy compels me to fire away.  And we don’t have to go far to start the fact check, as they lead with:

You would think that by 2012 the New York Times would know better than to take political rhetoric as fact, as the Washington Post notes in giving the president Two Pinocchios for the above claim “A politician can create a false, misleading impression by playing with words and using legalistic language that means little to ordinary people.”  The fact is, “reserves” is a technical term of art that does not provide a measure of recoverable oil expected to be in the ground. More from another Washington Post fact check debunking the above:

"On the surface, the president’s numbers are correct, based on official government data. But this is a good example of what we call 'non sequitur facts' — two bits of information that actually bear little relationship to each other…'Proven reserves,' whether for oil, natural gas or coal, has a very strict definition, in part because reserves are considered actual assets owned by companies...EIA data shows that proven U.S. reserves hit a peak of nearly 40 billion barrels in 1970 — after the Prudhoe Bay oil field was found in Alaska — and now stand at about 22 billion barrels. But here’s the strange thing: the United States also had proven oil reserves of 22 billion barrels through much of the 1940s. How is that possible? New sources of oil kept getting found, more-difficult-to-obtain oil suddenly became more economically viable, new oil-extraction techniques gained favor, and so forth.  This brings us to our next category of oil: undiscovered technically recoverable resources…These estimates add at least 140 billion barrels to what is known as the U.S. endowment of oil, for a total of more than 160 billion barrels.  In other words, eight times larger than just proven reserves."

The Times then goes on to pooh-pooh the idea that we can secure our energy future by partnering with Canada and Mexico saying:

"…that wouldn’t do the job either, even if Mexico and Canada sent every single barrel they produce to the United States—highly unlikely since they might want to use some of it for themselves."

Actually we can do the job.  Here is what our energy future looks like under current policies, according the Energy Information Administration: 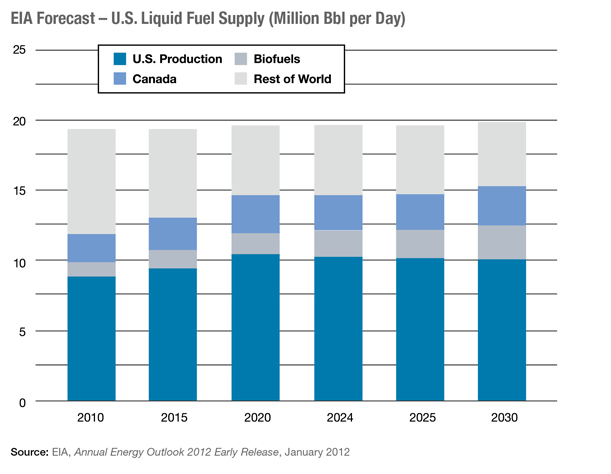 And this is what it looks like with pro-development, pro-partnership energy policies: When it comes to securing our energy future yes we can — and yet we are not — contra to the New York Times’ assertion that the current policies are hunky-dory:

"Domestic crude oil production is actually up slightly from 2004, to 5.6 million barrels a day. And despite a necessary slowdown in the Gulf of Mexico after the BP oil spill, the number of rigs in American oil fields has quadrupled over the last few years."

As I previously mentioned any gains made in the past few years have happened not because of the president’s policies, but in spite of them. Consider:

Recent polls show that 7 in 10 voters support increased domestic energy access, and 75 percent support developing the Keystone XL pipeline. These folks understand the direction of our nation’s energy policy is vital to our country, and it is a shame that the New York Times holds them in such disdain. It is even more of a shame that the “newspaper of record” can’t even put together a factual argument.