Realizing the Potential of Unconventional Oil and Natural Gas

“What we’ve seen over the last year or two is a recognition that this is not only about energy but also about creating a lot of jobs. It’s about economic development. It’s about industries coming back to the United States. It’s about increased government revenue, and it’s about contributing to economic growth.”

The IHS study underscores this resource’s transformative quality – it has the potential to play a large role in transforming our economy, employment and in reducing government deficits. Again, the study’s key projections:

Let’s look at some of these points in charts, starting with IHS’ projection for unconventional oil:

Here’s a chart that shows the projection for unconventional natural gas production capacity: As with oil, the remarkable aspect here is how unconventional natural gas (tight gas and shale gas) is projected to dominate overall U.S. gas production – growing to more than 80 percent of overall U.S. production by 2035.

We’ve talked the energy, the jobs and government revenues. The growth in unconventional oil and gas will produce benefits in other sectors – specifically, manufacturing, due to more affordable energy and demand for products used in America’s shale plays. The American Enterprise Institute’s Mark J. Perry has a chart illustrating the energy cost savings, due to natural gas, that already have been realized by industrial users: 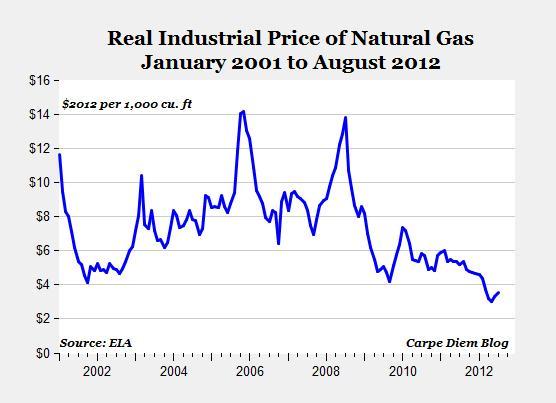 The chemicals industry is another example. Unconventional natural gas liquids that are used as a petrochemical feedstock, is projected by IHS to grow from 1.8 million barrels of oil equivalent per day this year to 4.8 million barrels in 2035. American Chemistry Council President and CEO Cal Dooley:

“This study delivers plenty of good news for the chemical industry and other American manufacturers. Abundant and affordable supplies of natural gas are revitalizing the chemical industry and providing a competitive edge for manufacturers in the global marketplace. This study confirms that these benefits from natural gas liquids are not a short-term phenomenon but an ongoing trend expected to last for decades.”

This unconventional energy is ours, beneath our feet, available if we safely and responsibly unlock its potential. That means embracing the resource and the technology used to develop it – hydraulic fracturing. It means not hindering development with unnecessary regulation or federal duplication of effective and efficient state oversight regimes. As IHS’ John Larson said, unconventional oil and natural gas is “one of the most significant energy events in the last 100 years.” Only if we make policy decisions to make it so.