AAA says the EPA and retailers should stop the sale of gasoline containing 15 percent ethanol, known as E15, because it could damage vehicle engines and void car manufacturers’ warranties. AAA’s statement:

"A recent survey by AAA finds a strong likelihood of consumer confusion and the potential for voided warranties and vehicle damage as a result of the Environmental Protection Agency’s (EPA) recent approval of E15 gasoline. An overwhelming 95 percent of consumers surveyed have not heard of E15, a newly approved gasoline blend that contains up to 15 percent ethanol. With little consumer knowledge about E15 and less than five percent of cars on the road approved by automakers to use the fuel, AAA is urging regulators and the industry to stop the sale of E15 until motorists are better protected." 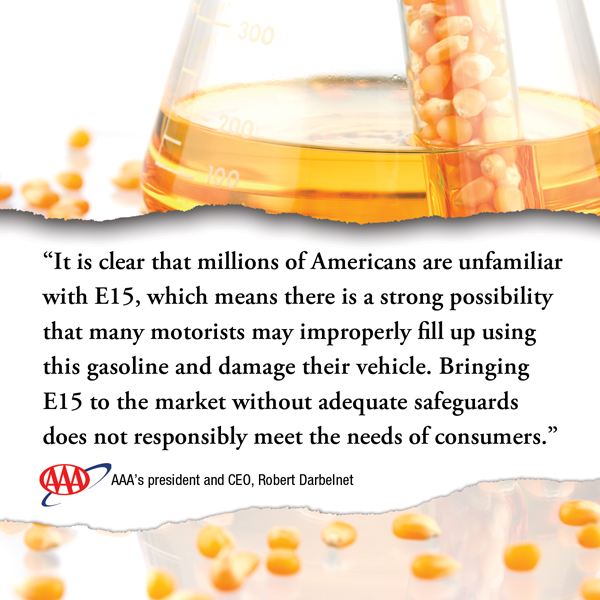 The warranty issue is real, with BMW, Chrysler, Nissan, Toyota and Volkswagen saying flat out that their warranties won’t cover fuel-related claims stemming from E15 use, AAA says. In addition Ford, Honda, Hyundai, Kia, Mazda, Mercedes-Benz and Volvo have said E15 doesn’t comply with fuel requirements specified in their owners manuals and thus may void warranty coverage. (Some letters from automakers on this, collected by U.S. Rep. James Sensenbrenner.)  AAA President and CEO Robert Darbelnet:

“It is clear that millions of Americans are unfamiliar with E15, which means there is a strong possibility that many motorists may improperly fill up using this gasoline and damage their vehicle. Bringing E15 to the market without adequate safeguards does not responsibly meet the needs of consumers. … The sale and use of E15 should be suspended until additional gas pump labeling and consumer education efforts are implemented to mitigate problems for motorists and their vehicles.”

AAA’s E15 warning is consistent with cautions in a study released earlier this year by the Coordinating Research Council (CRC). It found that more than 5 million existing cars and light trucks – which EPA says are OK for E15 use – could develop engine problems from using it. At the time, Mitch Bainwol, president and CEO of the Alliance of Automobile Manufacturers commented:

“The study… indicates the risk for consumers is profound, with clear environmental, safety, fuel efficiency and financial implications.  Cars were not built for E15. It’s that simple – and now we have material evidence that validates our concerns.”

The oil and natural gas industry supports renewable fuels and isn’t opposed to E15 itself. But EPA approval of E15 was improper – especially given CRC’s research that demonstrated consumer safety and property damage could be at risk with E15 use. AAA’s caution may be added to a growing chorus from groups – including automakers, small engine manufacturers, gasoline retailers, refiners and NGOs – that have expressed concern about E15 use and consumer safety.