ExxonMobil has released its annual long-term energy outlook, projecting global energy needs and supplies out to 2040. Some highlights:

On the supply side: 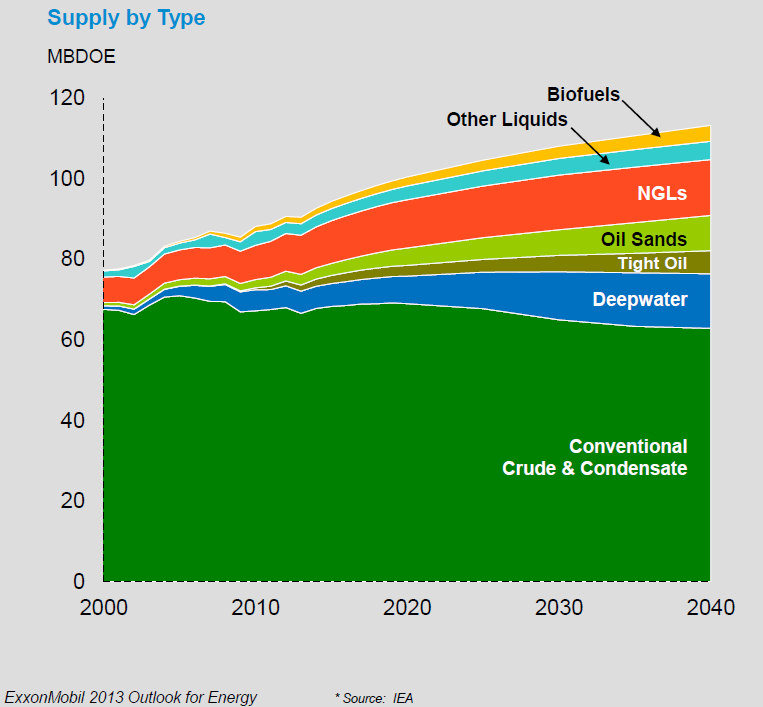 The forecast depicts this energy reality: The world’s economies and modern standards of living run on oil and natural gas and will continue to do so into the foreseeable future – with the help of new technologies that make them available and affordable on a global scale. This is especially true for unconventional oil and natural gas (fracking) –natural gas use ExxonMobil predicts will play a prominent role in lowering CO2 emissions in OECD countries by 20 percent by 2040 compared to 2010.

The report predicts a global “ability to significantly expand prosperity with relatively modest growth in demand” because of greater energy efficiency:

"In all countries, modern technologies, fuels and energy management practices replace less efficient ones. Building and manufacturing processes use less energy, the cars we drive are more fuel-efficient and more natural gas is used for electricity generation. All of this combines to slow energy demand growth in comparison to gains in economic growth and living standards."

It’s a good-news forecast for the United States, which has plentiful reserves of oil and natural gas (again, see EIA’s forecast), especially from unconventional sources (have we mentioned fracking?) – so that the U.S. could be a natural gas exporter by 2020, the company says. The unanswered question is whether we’ll get the policies and the leadership needed to safely and responsibly develop our energy wealth. These include access to new oil and natural gas reserves, onshore and offshore, a common-sense approach to regulation and fostering a pro-growth energy investment climate – part of which includes rejecting tax increases that could chill investment, job creation and energy development.