A new API report estimates that the U.S. oil and natural gas industry has invested more than $252 billion trying to improve the environmental performance of its products, facilities and operations since 1990 – about 65 percent of that directed toward cleaner air and water.

The report is based on spending data from representative companies that was used to estimate industry-wide performance. Highlights:

Here’s how the spending breaks down in terms of specific environmental area, for the 1990-2011 time frame: 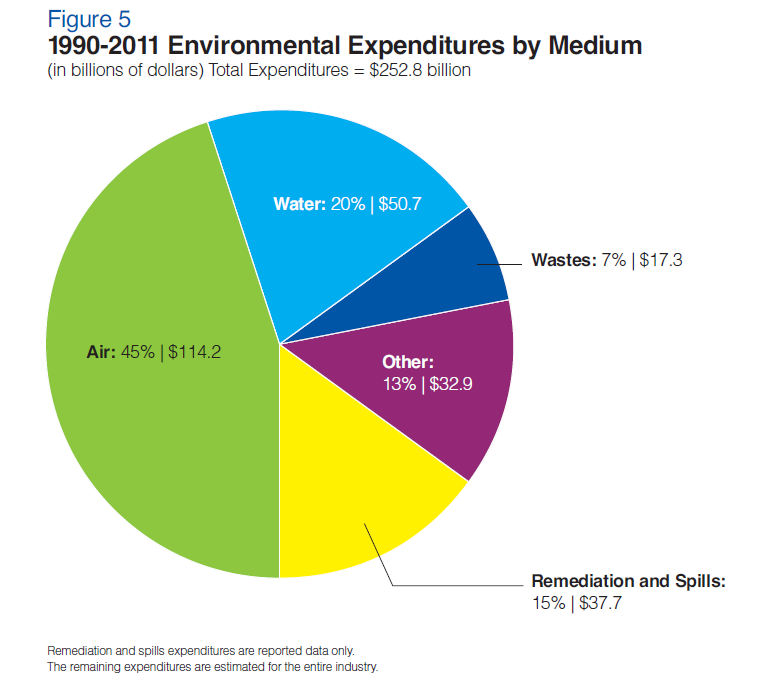 Note: In both charts “other” includes recurring activities not reported under air, water or wastes such as removing abandoned production platforms and supporting oil spill cooperatives.

Clearly, a major focus of industry spending related to the environment is on reducing air pollution – and in 2011 industry met or surpassed the requirements of federal clean air statute. The report:

"The emphasis on air pollution control is driven by the requirements of the 1990 Clean Air Act Amendments and subsequent regulations to reduce emissions from so-called “stationary sources” (industrial facilities such as refineries) and “mobile sources” (cars, trucks, etc.). Federal and state environmental programs aimed at reducing carbon monoxide, smog, and air toxics require the sale of oxygenated, reformulated, and low-volatility (evaporates more slowly) gasolines in certain parts of the country."

Certainly, industry recognizes environmental protection in its products and operations is a continuing responsibility that is taken seriously – reflected in this report and others detailing industry’s investments in greenhouse gas-reducing technologies.