This week API, on behalf of the U.S. oil and natural gas industry, furnished comments on the Energy Department’s 2012 study of the impact of exporting U.S. liquefied natural gas (LNG). You can read them in full here, but let’s cover some of the main points:

.. that will amply support domestic and export markets

U.S. annual natural gas consumption is in the 24 Tcf range, with total cumulative consumption (2015-2035) estimated to be 567 Tcf by EIA. EIA also estimates that 20 years of exports phased in between 2015 and 2020 would generate total cumulative exports of 41 Tcf. Here’s the chart: 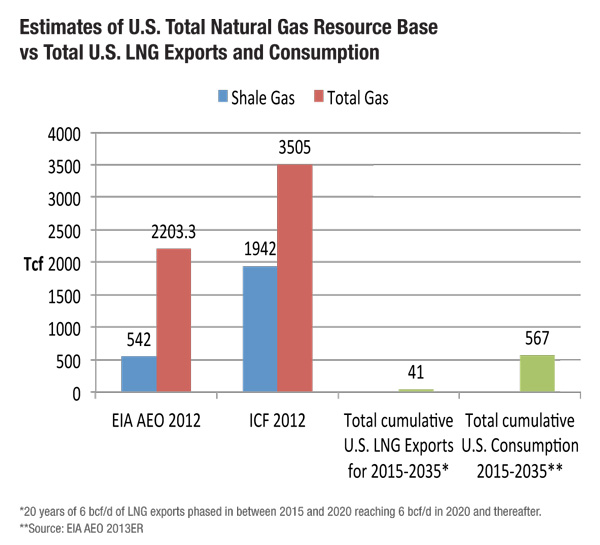 “This means that total cumulative exports would consume only 1-2 percent of the total resource base estimated by the ICF and the EIA, demonstrating even greater potential for the U.S. to export LNG.”

… and U.S. manufacturing will be helped, not hindered

To export LNG, liquefaction facilities – costing in the billions of dollars – will be needed. This will stimulate demand for capital equipment that will cascade through the economy, supporting thousands of U.S. jobs. API:

In addition, increased output of natural gas liquids (NGLs) from overall natural gas development also will provide economic stimulus in the form of NGLs including ethane, which is a primary feedstock for ethylene that’s used to produce a number of different products.

The time is now!

Though the United States is the world’s leading producer of natural gas with ample resources to handle domestic demand and to supply export markets – creating U.S. jobs, stimulating the economy and helping our trade balance – federal officials must approve U.S. export projects without delay or risk seeing international competitors (some of whom have projects under way) win the race to supply those export markets. API:

Shorter: Not all export projects around the globe will be built, because world demand won’t support them all.

So the question: Will these LNG export projects be built in the United States, or will potential U.S. projects be shelved because competing facilities elsewhere were built first? That’s what the LNG debate really comes down to. A number of studies, including this one from Brookings, have said exports’ impact on domestic natural gas prices will be modest – while the overall lift to our economy will be significant – so that’s not the key issue. The real point is whether America’s vast natural gas resources will be put to work for Americans, creating jobs and projecting growth throughout the economy.