The average U.S. retail price for regular motor gasoline has risen 45 cents per gallon since the start of the year, reaching $3.75 per gallon on February 18. Between January 1 and February 19, the price of Brent crude, the waterborne light sweet crude grade that drives the wholesale price of gasoline sold in most U.S. regions, rose about $6 per barrel, or about 15 cents per gallon. 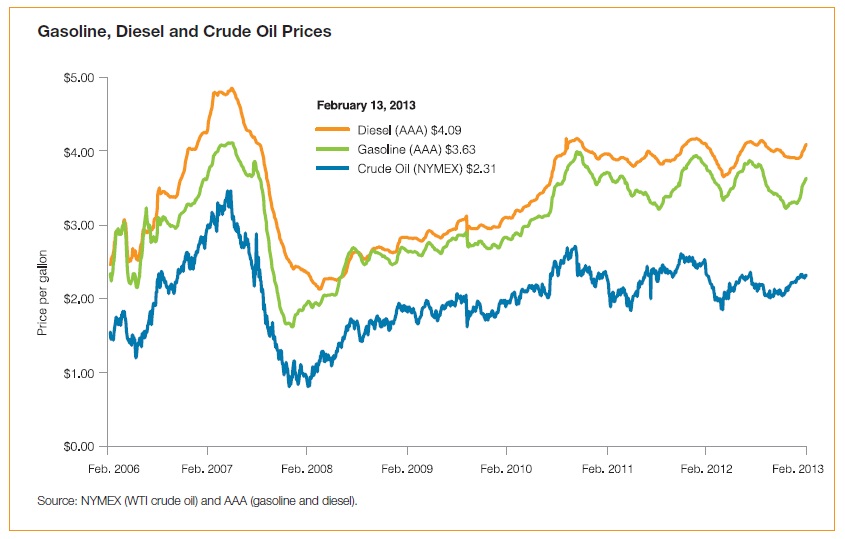 There’s lots of detail from EIA here on the factors affecting global crude markets – chiefly increases in global demand as economies pick up steam after the recent downturn (reflected above in 2008 and into 2009). Mainly, there’s more optimism about the trajectory of the global economy, which is translating into more demand. Meanwhile, on the supply side, Saudi Arabia’s decision in the last few months of 2012 to cut production by 700,000 barrels per day also is impacting the global crude price.

Among these are: planned and unplanned refinery maintenance; the low starting level for gasoline crack spreads going into 2013; preparation for seasonal fuel specification changes; and developments in global product demand that have affected domestic refinery utilization rates, maintenance needs, and product balances.

So the broader question is, recognizing that global demand for crude oil is projected to increase with growing world population, how can the United States become more energy self-sufficient and in the process help exert downward pressure on crude prices in the global market?

Most importantly, we can develop more of our own energy. The U.S. is, in fact, rich in oil and natural gas – especially oil and natural gas from shale and other tight rock formations, produced with the help of hydraulic fracturing. (See reports from the International Energy Agency and IHS Global Insight.)

With increased access to vast oil and natural gas reserves onshore and offshore that currently are off limits – including the National Petroleum Reserve-Alaska, the Arctic National Wildlife Refuge and the outer continental shelf – and by strengthening our energy partnership with Canada, the U.S. could be well on its way to meeting 100 percent of its liquid fuel needs through North American sources by 2024.

Key energy infrastructure is crucial to the above, including construction of the full Keystone XL pipeline and other pipelines. The Keystone XL could bring more than 800,000 barrels of oil a day from Canada and the Bakken region to U.S. refiners along the Gulf Coast. The project is vital to full development of Canadian oil sand resources – energy that’s abundant and secure from our No. 1 supplier of imported oil.

While gasoline prices are a product of a global crude oil market, the U.S. can and should take more control over its energy future by developing resources right here at home.