The White House is continuing the drum beat for higher taxes on oil and natural gas companies – oddly, as a reaction to higher gasoline prices. Press Secretary Jay Carney this week:

“Anybody fill up their gas tank this weekend?  Think the oil and gas companies can maybe afford to give up their taxpayer – special interest break?  I think most Americans would say yes.”

Let’s think this through. Gasoline prices have been rising – mostly because of underlying increases in the cost of crude oil due to higher global demand for oil – and the White House press secretary’s response is to connect gasoline prices with a tired proposal to raise taxes on the producers of gasoline.

Now, you don’t have to be a Harvard professor to recognize that raising taxes on the companies that find and develop oil and refine it into the fuels our country needs could lead to an increase in production costs. Economics 101. In fact, studies have shown that higher taxes on oil and natural gas companies would mean less energy produced, job losses and lost revenue to government – more than $220 billion by 2030.

Speaking of Harvard professors – there’s this recent paper from one at the Harvard Kennedy School, arguing that eliminating “fossil fuel subsidies” would not affect oil production while raising revenue for the U.S. Treasury. Well, again, a Wood Mackenzie study says higher taxes would negatively affect production – costing the U.S. 280,000 barrels of oil equivalent per day by 2030. As for government revenues, here’s the glide path Wood Mackenzie projects for the higher-taxes choice: 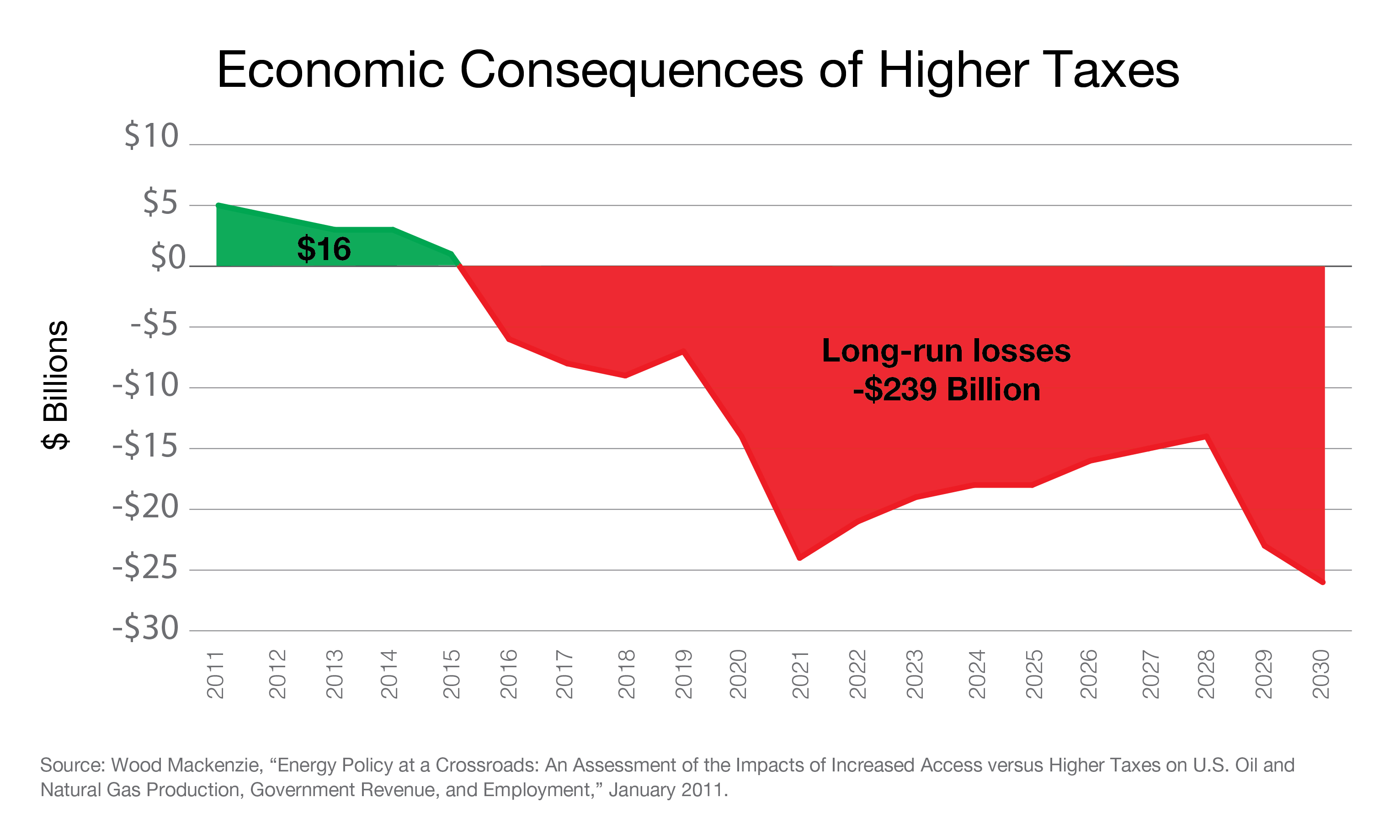 Add up the entire list and you get $41 billion over 10 years. We’ll come back to that.

As for the top four items – first, the expensing of intangible drilling costs (IDC) isn’t a “subsidy” or a “tax break,” which we explain here. Currently, large integrated oil companies can deduct 70 percent of their IDC over the first year of production and the rest over the next four years. The White House has proposed changing this so companies have to spread the deduction over time. Either way, the amount being deducted is the same, which means the taxes ultimately being generated are the same. Industry is able to use cash flow from the current rules to invest in equipment and jobs as they keep drilling and developing energy here at home. At the same time, oil and natural gas companies are paying $86 million a day to the federal government in rents, royalties, bonus payments and taxes.

Second, the domestic manufacturing tax deduction. Even Congressional Democrats acknowledge that the Section 199 deduction is, well, a deduction and not a “subsidy.” Under the higher-taxes scenario, Section 199 – which is designed to promote domestic activity by allowing companies to offset the higher cost of doing business in the U.S. and which is available “to all taxpayers, including individuals, C corporations, farming cooperatives, estates, trusts, and their beneficiaries“ would be taken away – but only from oil and natural gas companies. Singling out an industry for different tax treatment is poor tax policy.

Third, percentage depletion – this is a cost recovery method that allows taxpayers to recover their lease investment in a mineral interest through a percentage of gross income from a well. It’s available to all extractive industries in the U.S., such as gold and iron. It’s not unique to the oil and natural gas industry.

Finally, regarding geological and geophysical expenditure amortization, like IDC this would simply change when taxes are paid, not how much is paid.

If the real issue is revenue for government, the industry is generating that already. From 2007 to 2011, the industry generated more than $57 billion in rents, royalties and bonuses from federal leases. Again, on average, industry generates about $86 million per day in revenue. So, clearly, fostering increased domestic oil and natural gas activity through greater access to domestic reserves is the real answer. Because that increased activity – along with more energy and more jobs – would generate more revenues from industry to government. Wood Mackenzie says additional revenue to government under the increased access approach would be more than $126 billion by 2020 and more than $363 billion by 2025 – dwarfing the $41 billion that would be raised by increasing taxes. Here’s our chart showing the cumulative difference between the increased access path and the higher-taxes path: 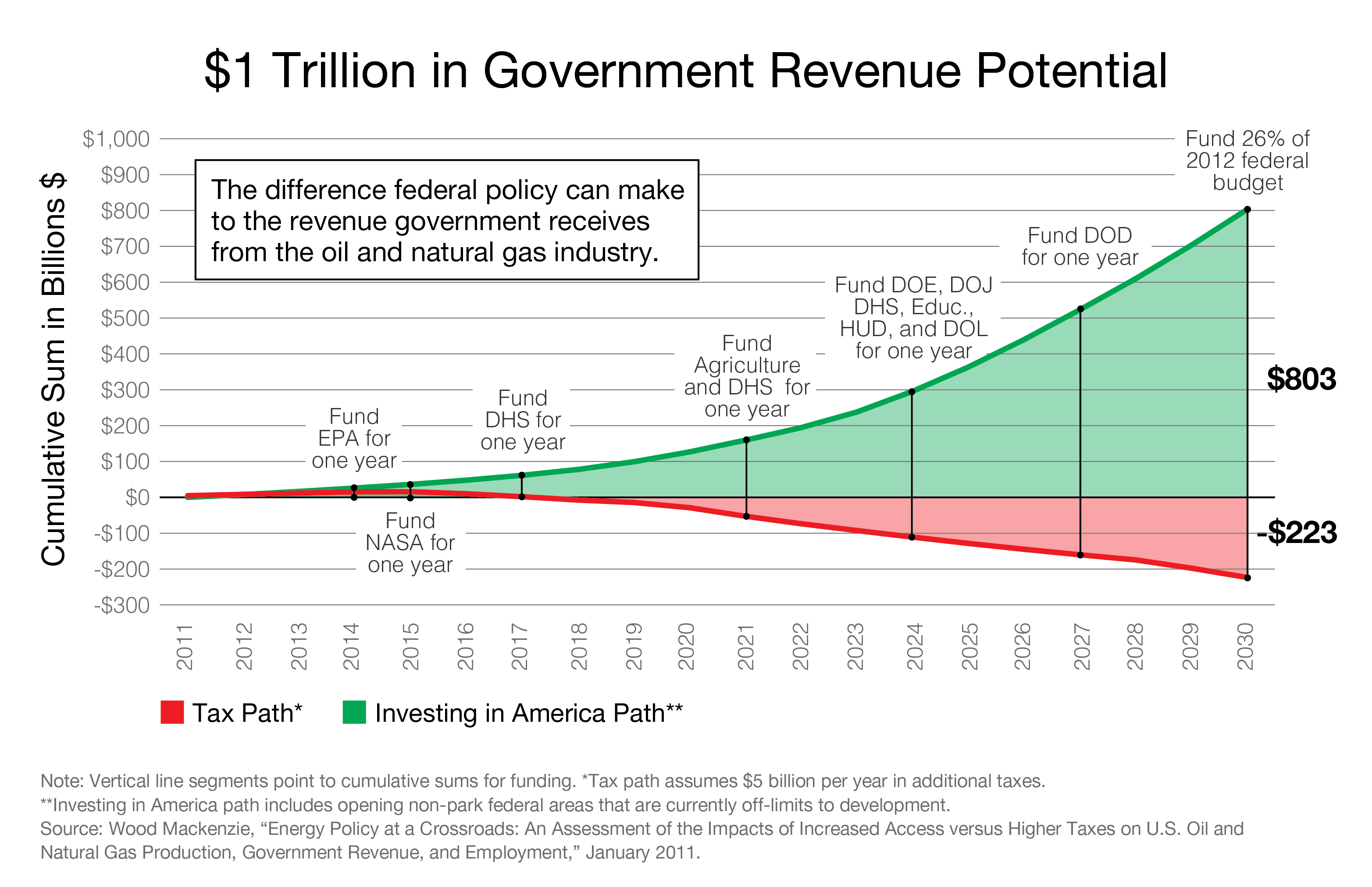