We say opportunities for oil and natural gas development in federally controlled areas – onshore and offshore – have been limited. Some are saying that’s false. Let’s look at the facts.

Claim: 70 percent of undiscovered oil and natural gas on federal lands is available for leasing and development.

Fact: 83 percent of areas controlled by the federal government are closed to oil and natural gas development.

What we have here is some sleight of hand with terminology. We’ll use the offshore situation to illustrate. During last year’s State of the Union address the president said he was directing the administration to open up more than 75 percent of America’s offshore resources for development. The percentage figure referred to undiscovered, technically recoverable oil and natural gas resources – resources that haven’t been found but are believed to exist because of past exploration upon which data extrapolations are made. So, in the offshore areas the federal government has made available for development, the administration could assert that more than 70 percent of undiscovered resources are available.

But, as we discussed then, the real number to pay attention to is the percentage of all our offshore acreage that’s open to development – only about 13 percent – and it looks like this: That’s why the more important number is that in the president’s proposed five-year plan for offshore oil and natural gas development only 13 percent of the outer continental shelf (OCS) is open to actual drilling operations. And if you can’t drill for oil and natural gas, you can’t know how much you have. To illustrate let’s look at this chart showing government assessments in 1996, 2006, and 2011 of undiscovered technically recoverable oil resources  in the OCS: Graphs for Alaska, the Atlantic and Pacific are flat, but the one for the Gulf of Mexico shows dramatic increases from 1996 to 2006. Why? Because that’s where production has been. To produce oil you need to find it, to find it you need to explore and when you explore you create data upon which solid estimates are based. Let’s move on.

Claim: The oil and natural gas industry has expressed declining interest in leasing federal onshore lands that already are eligible for drilling.

Fact: Administration leasing and permitting policies have saddled development on federal lands with uncertainty and delay, diminishing opportunities there. In addition, the better onshore opportunities are found on state and private lands because the process to gain access there is more stable and predictable.

According to the House Natural Resources Committee (using Bureau of Land Management data), on average it has taken 30 percent longer for the federal government to approve new drilling permits under the current administration than in four years previous. One study found that the average wait for a federal permit in 2011 was measured in months, compared to a matter of days for a state permit in three energy-producing states.  A 2012 study by EIS Solutions found permitting and drilling on federal lands in western states in decline between 2009 and 2011. 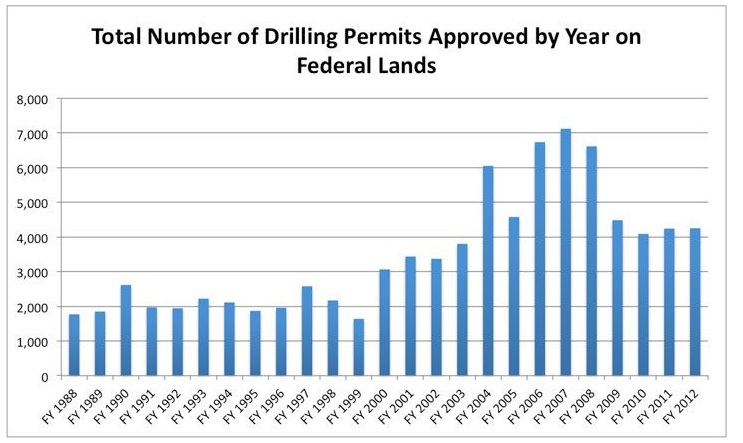 That’s a pretty stark picture. Meanwhile, with everybody in Washington focused on revenue for the government, here’s what the proceeds from oil and natural gas sales (royalties, rents, bonuses and other revenues), onshore and offshore, have looked like: 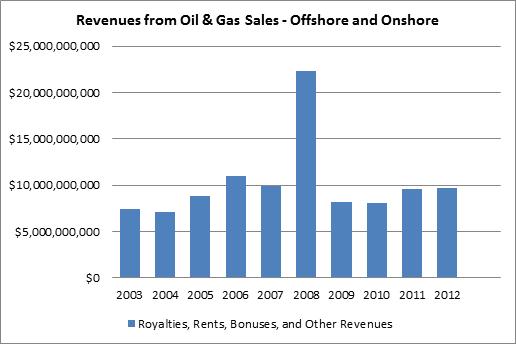 Bottom line: With the right policies in place, with the right leadership and management, these trends could change. With increased access to the oil and natural gas abundance in public areas, onshore and off, America’s oil and natural gas companies could develop more energy, create jobs, spur broader economic growth and generate additional revenues for government.

The chart below illustrates the choice – between polices that help increase access to resources and those that hinder development.  As choices go, it’s pretty clear.