Energy Earnings, Taxes and the Right Path for America

An interesting discussion this week at a Politico Pro event hosted by API on the impacts of tax policy on the U.S. energy sector – timely, because if past is prologue oil and natural gas earnings reports this week and next likely will be accompanied by new calls for higher industry taxes. Let’s take a look at each issue. The point, as the chart below shows, is that industry earnings have been well in line with the rest of U.S. manufacturing, averaging about 8 cents per dollar of sales over the past five years ... 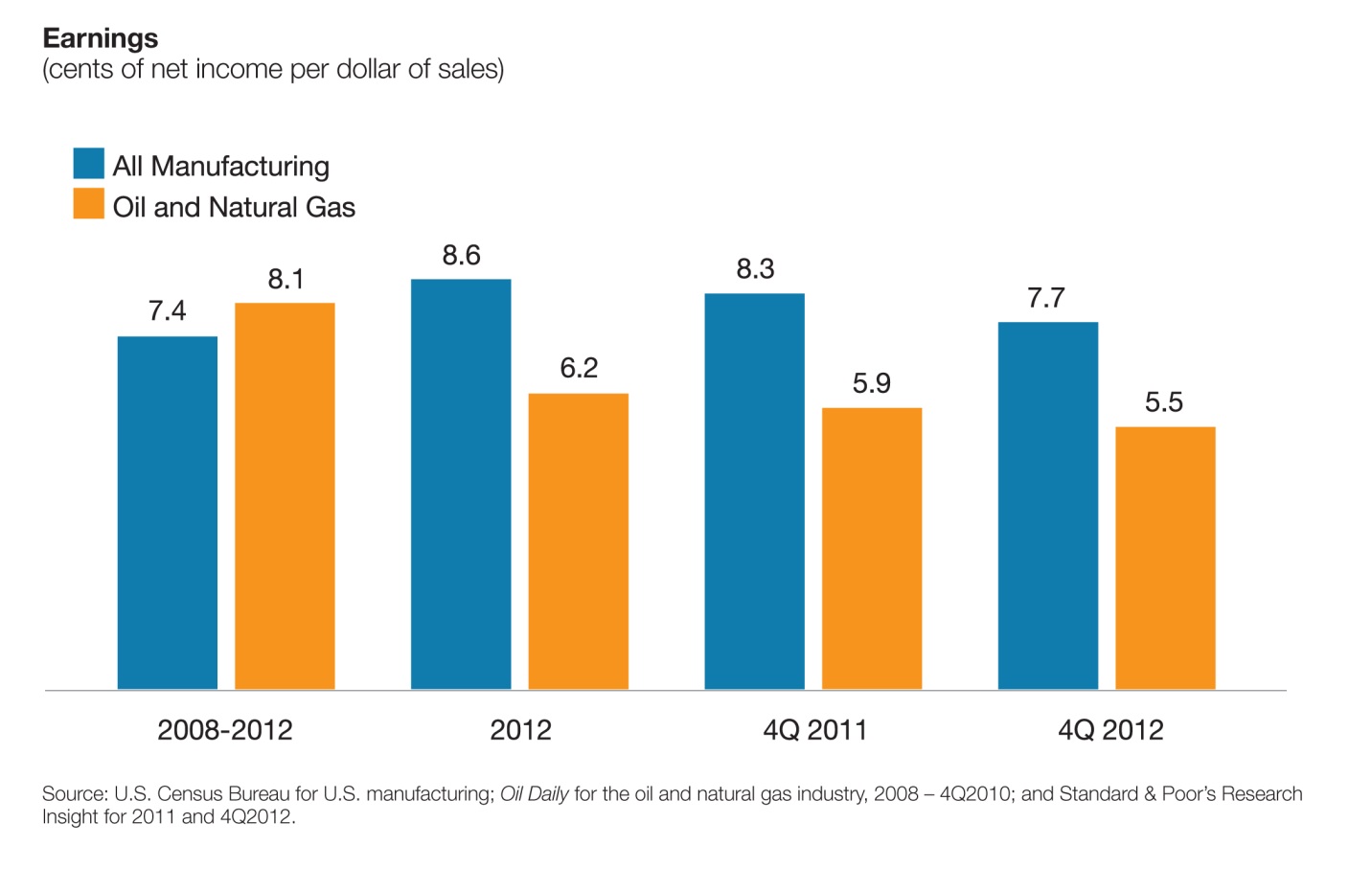 … while paying an effective tax rate that tops those paid by other business sectors. 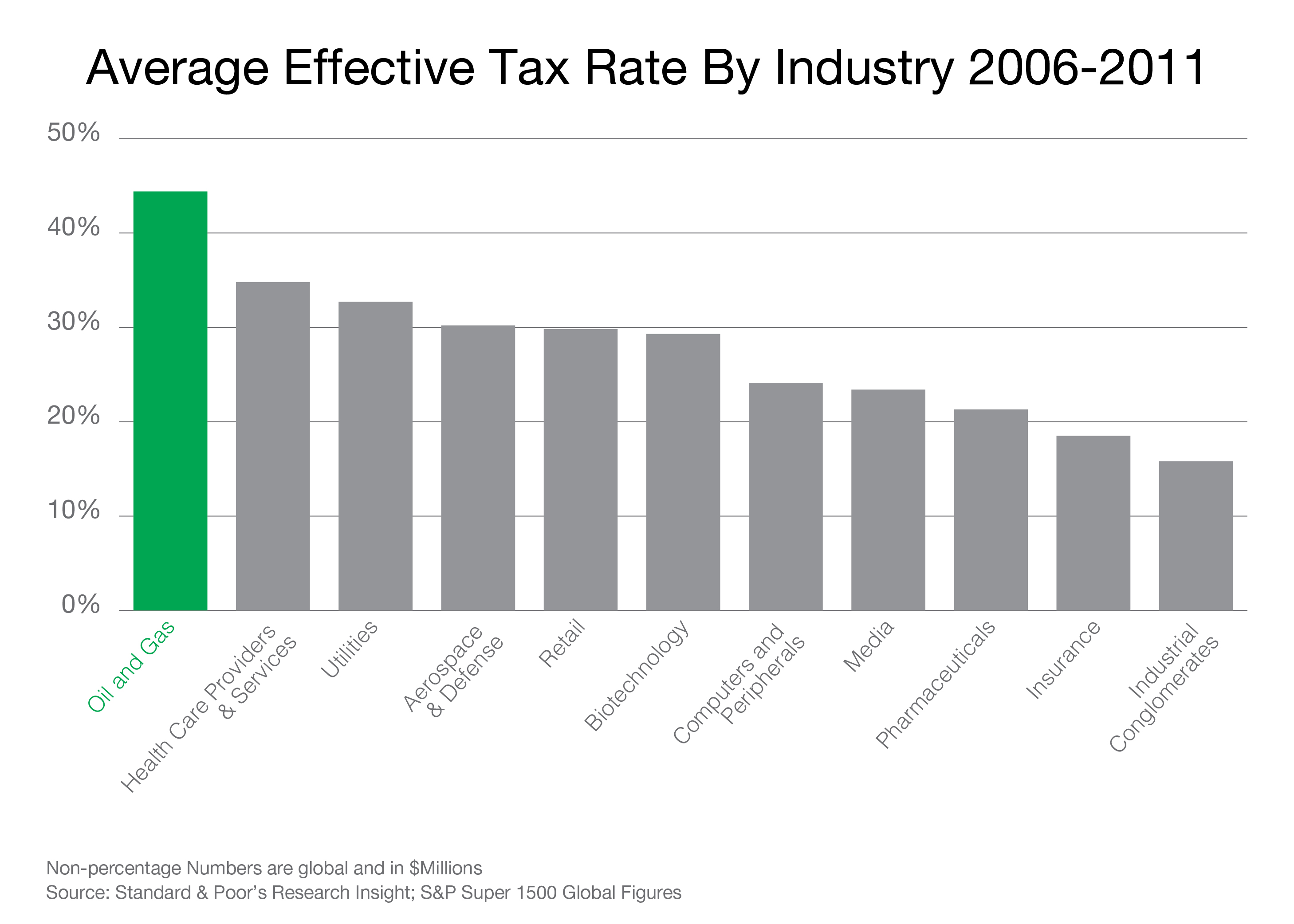 One more: effective tax rates for 2012, broken out by individual companies: Now, let’s talk about calls for higher energy taxes, which may be renewed as industry earnings reports come in. The battle lines on this issue were underscored at this week’s Politico event during an exchange between Rep. Mike Pompeo of Kansas and Sen. Debbie Stabenow of Michigan. First Stabenow:

This is a national security issue as well as a national economic issue. Because this is of strategic economic and energy security interest to us in terms of energy independence, jobs in the economy as well as focusing on what’s happening in the environment, we have a stake in partnering with the private sector in a broader way than we have done in terms of energy security. If every other form of energy had had the tax preference of oil … we’d have a different look.

There’s this idea that the oil companies have had decades of subsidies. I’d love somebody to show them to me. … These are depreciation schedules, the IDCs (intangible drilling costs) are depreciation schedules so it’s just a question of how quickly one can expense it, and we can argue about what the right time period is for expensing it. But this isn’t a tax credit, it’s not a hand out, there’s no cashed check. It’s just a matter of saying you had a cost of doing business and we don’t tax on revenue in this country, we tax on profits. …

Pompeo is correct. Our industry doesn’t receive “subsidies” – a full discussion of which you can read here. In most cases those calling for higher industry taxes are targeting cost-recovery mechanisms used by other sectors, not just oil and natural gas. These are not subsidies. Neither is the Section 199 deduction, enacted by Congress in 2004 to spur hiring and investment and used by most U.S. businesses - which some have said should be repealed for a handful of oil and natural gas companies. Continuing to call these tax treatments “subsidies,” as Stabenow did during the Politico event, distorts the public debate and ultimately could hinder achieving goals everyone agrees on: job creation, economic growth and more domestic energy production. API Chief Economist John Felmy, during a recent conference call with reporters:

“If you want more revenue from the industry, encourage oil and natural gas companies to invest in more projects here in the United States. That would put people to work, produce earnings, and generate more income to tax, both corporate and personal. And the new activity also would increase other revenues like royalties.”