Keystone XL: Safe for the Environment

Each of the State Department’s four reviews of the Keystone XL pipeline – during the more than four years the project has been under consideration – focused primarily on the Keystone XL’s impacts on the environment: air, ground and surface water, wetlands, vegetation, wildlife and more. State went beyond the Keystone XL itself, evaluating the environmental impact of oil sands crude that would be delivered through it – as well as the impacts on Canada.

Bottom line: Each review came to the same conclusion – the Keystone XL’s construction and operation will not significantly impact the environment. From the most recent State assessment, issued in March:

API’s official comments on State’s review support this conclusion for a number of reasons:

On climate, while the Keystone XL itself would have virtually zero emissions, it’s a proxy issue for opponents of oil sands. Yet, the State Department notes that oil sands crudes are only “somewhat more” GHG intensive than other crudes. Here’s a chart from the Canadian Association of Petroleum Producers illustrating the point: 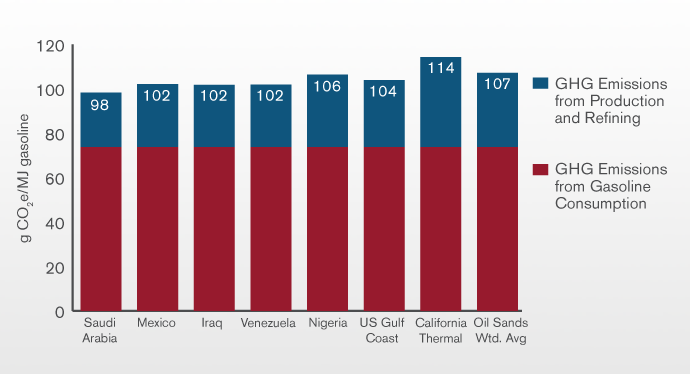 As you can see, the large majority of GHG emissions occur during gasoline consumption, regardless of the type of crude. API:

… the DOS (State Department) analysis shows that GHG emissions from Canadian oil sands crude are comparable to many other crude oils commonly refined in the United States. … This finding is supported by research by Bergerson … which indicates that depending on the production and refining methods, oil sands crudes can have a carbon footprint lower than conventional crudes. DOS further finds that as we move forward, the difference in GHG emissions from Canadian oil sands crudes and other crude oils is likely to become smaller. Specifically, DOS states “(i)t is not clear how changes in technology will affect the relative GHG-intensity of reference crudes and WCSB oil sands derived crudes, but it is believed the gap between these crudes is more likely to narrow than widen.” (Appendix W, page 69) Moreover, the SEIS finds that “in 10 years it is possible that oil sands will be less energy intensive, well to wheels, than Saudi Arab Light delivered to the same Gulf Coast destination.”

The latter point is very important – and one that EPA missed in its recent criticism of State’s review: Technologies and innovation very likely will make oil sands extraction less GHG intensive over time. They already have. The government of Alberta, where oil sands reserves are located, found that the oil sands industry reduced GHG emissions per barrel of oil an average of 26 percent since 1990, with some facilities reaching reductions of 50 percent.

Let’s look at impacts on the physical environment. Again, State says they would be minimal:

… the proposed pipeline area does not cross any sole-source aquifers, as designated by U.S. Environmental Protection Agency (USEPA) Region 8 (USEPA 2012). In addition, the pipeline is underlain by a very shallow groundwater resource … over only very limited stretches (the most extensive and continuous of which is its crossing of the Platte River Valley). A limited number of public water supply wells are located within one mile of the proposed pipeline area (39 along the entire route; Montana-1, South Dakota-0, Nebraska-38), and a very limited number of private water supply wells are located within 100 feet of the pipeline (Montana-6; South Dakota-0, Nebraska-14).

With regard to surface water, Section 3.3.3 (of the review) shows that KXL would make numerous water body crossings (1,073), but only 56 (5.2%) are crossings of perennial streams. No public water supplies are located within one mile of the right-of-way in Montana, South Dakota or Nebraska. In only one instance does the right-of-way cross upstream of a public water supply, and in that circumstance crosses a tributary to the stream from which the water is diverted 44 miles upstream.

The Keystone XL pipeline is the most scrutinized infrastructure project ever. The State Department reviews, a separate, extensive study by the state of Nebraska, public hearings, commenting periods – all have been part of an exhaustive vetting of the project and its environmental impact. It has been a good and valuable discussion.

Indeed, safety and protecting the environment are key industry priorities. Everyone associated with the project, from the pipeline builder and operator to the companies that own the oil that will move through it wants to keep that oil in the pipeline.

So let’s move on. The full Keystone XL would create jobs, lift state and regional economies as well as the national economy and make the United States more energy secure while fortifying our unique and deep relationship with Canada. Let’s get started.