New Interior Department Secretary Sally Jewell is on the right track in her remarks at this week’s Offshore Technology Conference in Houston, committing Interior to providing “regulatory certainty, predictability (and) consistency” in oil and natural gas development.
This is critical to reverse recent declining development in federal areas. According to the Congressional Research Service, while oil production in non-federal areas was up 2009 to 2012, in federal areas it was down 6 percent: Similar story for natural gas – rising production in non-federal areas compared to a 21 percent decline in areas controlled by the federal government:

The uncertainty Jewell wants to address shows in how long it takes to get a federal drilling permit, compared to the wait for a state permit (House Natural Resources Committee graphic): 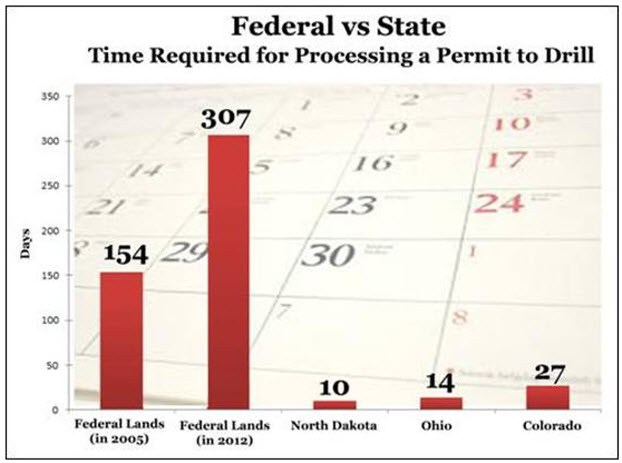 All of this is to say Secretary Jewell has a big job, and we wish her well. The situation in California shows some of the challenges. The state’s Monterey Shale play, believed to hold 15 billion barrels of oil, could be a prolific energy producer and job creator. Californians recognize this. A new poll (see question #30) finds they support Monterey Shale development 46.3 percent to 29.7 percent.

Yet, recently the Bureau of Land Management announced it is putting off an auction planned for later this month after a federal judge ruled that BLM was auctioning drilling rights before conducting a sweeping environmental review. While there are specific issues to be addressed in that case, the larger point is that federal and state officials need to move forward with developing our oil and natural gas reserves, in California and other states. API Chief Economist John Felmy discussed these points during a conference call with reporters:

“The California example is not unique. It is, in fact, emblematic of a broader pattern of the federal government taking too much of America’s vast energy resources off the table. For the last several years, the federal government has shown virtually no interest in promoting new energy development. Today, 87 percent of federal offshore areas remain off limits to oil and natural gas production. And where development is possible in federal areas, permitting and leasing is a slow and cumbersome process.”

Felmy said a recent study found that the Monterey Shale’s potential benefits could include creating 500,000 new jobs in two years and 2.8 million by the end of the decade, while generating $4.5 billion in government revenue in two years and $24.6 billion by 2020. Realizing those benefits will take leadership – increased access and common-sense regulation – that still is lacking in Washington. Felmy:

“From Day 1 we’ve seen this administration take actions that draw out, drag on and don’t promote the development of oil and (natural) gas on federal lands. … We’ve seen a pattern over the past five years of slow downs and that’s been reflected in terms of the production numbers and the leasing numbers.”

California is on the cusp of major new oil and natural gas development, if it will allow it. Felmy:

California “needs to move forward, understand how hydraulic fracturing has been heavily regulated in other states, learn from those opportunities … to recognize that there are good regulations that you can put on the books that allow for exploration and production, jobs and revenue – and there are onerous ones.”

Because of her background, which includes work in the oil and natural gas industry, the new Interior secretary appears uniquely positioned to handle the challenge of balancing federal responsibilities and advancing “all-of-the-above” policies that encourage safe and responsible oil and natural gas development.

Integral to this is using safe, technologically advanced hydraulic fracturing in America’s vast shale plays to sustain the ongoing U.S. energy renaissance. “Fracking as a technique has been around for decades,” Jewell said recently. “I have performed the procedure myself very safely.”

Certainly, this is a useful perspective in developing a vision for America’s energy future. Felmy:

“As we look ahead we know that our nation has the workforce, the innovative and the entrepreneurial spirit to make the most of the energy renaissance created by the energy from the shale revolution. We also know that all too often, what’s lacking is political leadership and vision. We therefore urge lawmakers on all levels to work together to create a fact-based energy policy, so that our nation can take full advantage of its bright energy future and secure its place as a 21st century global energy leader.”