As a former mayor of Richmond, a city with a gas utility, I think it makes no sense to be anti-pipeline. But I oppose the Keystone XL project. Although the president’s decision is technically over whether to allow a pipeline to deliver oil from Alberta to the coast of the Gulf of Mexico, the real issue isn’t the pipeline. It’s the wisdom of using tar sands oil. … By most accounts, oil from tar sands is 15 to 20 percent dirtier than conventional petroleum, and the process of extracting and refining it is more difficult and resource-intensive. With so many cleaner alternatives, there is no reason to embrace the use of a dirtier fuel source. Approving the pipeline would send a clear signal to the markets to expand the development of tar sands oil. Such an expansion would hurt our nation’s work to reduce carbon emissions. We have to make energy cleaner tomorrow than it is today. That’s why the president should block Keystone. … Tar sands oil is the opposite of an innovative, make-it-cleaner approach. It represents a major backslide.

Sen. Kaine is right on a number of energy issues – supporting more offshore drilling for oil and natural gas as well as more natural gas development from hydraulic fracturing – but on the Keystone XL he’s just wrong. Let’s take a closer look.

And remember, the Keystone XL isn’t just about oil sands. Twenty-five percent of its volume would come from the U.S. Bakken region – light, sweet oil from shale.

As we’ve noted, in terms of greenhouse gas emissions (measured well to wheels) oil sands crude is comparable with other crudes coming into the U.S. (And again: The U.S. has been importing and refining crude from Canada’s oil sands for years.)  The government of Alberta’s chart on the full life-cycle GHG emissions of various crudes:

“… there would be no substantive change in global GHG emissions.”

Frankly, the senator can’t have it both ways – claim to be for oil and natural gas development, including drilling off his own state’s coast – and then draw a line with that oil.

“With so many cleaner alternatives …”

Let’s be real: According to the U.S. Energy Information Administration (EIA), oil and natural gas account for 62 percent of the energy Americans use: 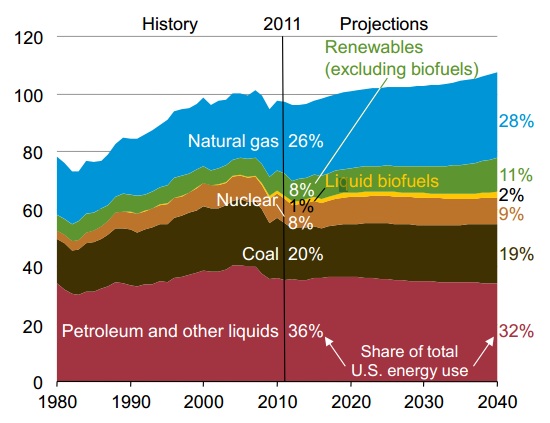 For good reason. It’s stable and reliable energy. The energy density, portability and abundance of oil and natural gas allow it to fuel an economy the size of the United States, while enabling our modern, comfortable lifestyle. Oil and natural gas is a great energy source today and will be tomorrow – 60 percent of our energy in 2040, EIA says. Great is the fact that the United States is sitting on vast reserves of both (thanks to shale and hydraulic fracturing) and also has access to abundant oil sands from neighbor and ally Canada.

Development of other energy sources is important, and with $71 billion spent on carbon-reducing energy technologies (2000-2010), the oil and natural gas industry supports this. Our investment was nearly as much as other U.S. private industries combined ($74 billion) and nearly double that of the federal government ($43 billion). But look again at the EIA chart above. Alternatives pointed to by Sen. Kaine accounted for just 8 percent of our energy in 2011 – 9 percent if you include liquid biofuels. EIA projects these to grow to just 13 percent (including biofuels) by 2040. The reason is these energies remain limited by available technology and the challenges of scale and affordability.

“Approving the pipeline would send a clear signal to the markets to expand … tar sands oil.”

Again, that market already exists, and the potential wealth represented by oil sands – measured in the trillions of dollars – compels its development. Gary Doer, Canada’s ambassador to the U.S. this week:

The market isn’t looking for a U.S. signal – only a decision from Washington, delayed for going on five years, on whether the U.S. will say yes to greater energy security, yes to a strengthened partnership with Canada, yes to more U.S. jobs and economic growth – or whether it will snub an ally, forcing it to deepen energy relationships with other countries, while foolishly rejecting secure energy from a friendly source that will be needed to keep America strong.

Sen. Kaine isn’t the first member of Congress to try to patrol both sides of the street on an important issue. But his stated quest for an environmental legacy by opposing the Keystone XL pipeline isn’t based on fact or reason.