Think of Anadarko Petroleum’s Lucius spar, the steel tube that will support the company’s newest Gulf of Mexico production platform, as a soda can floating in the ocean. A 23,000-ton soda can.

Company officials showed off the spar earlier this month at Kiewit Offshore Service’s fabrication yard in Ingleside, Texas, across the bay from Corpus Christi. The spar’s key particulars and capabilities:

Here’s what it looks like, seen during transport from the primary fabricator to the Kiewit yard: 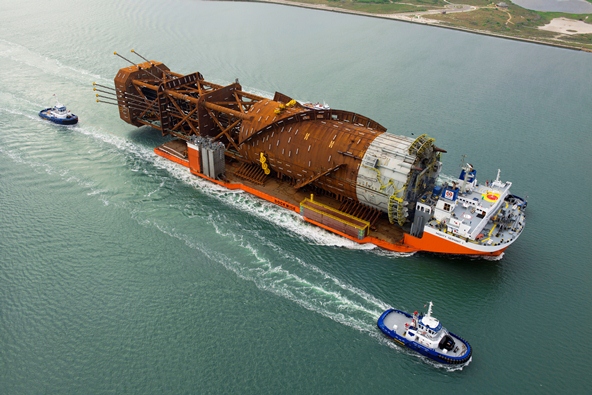 And as it currently rests in the waterway next to Kiewit: 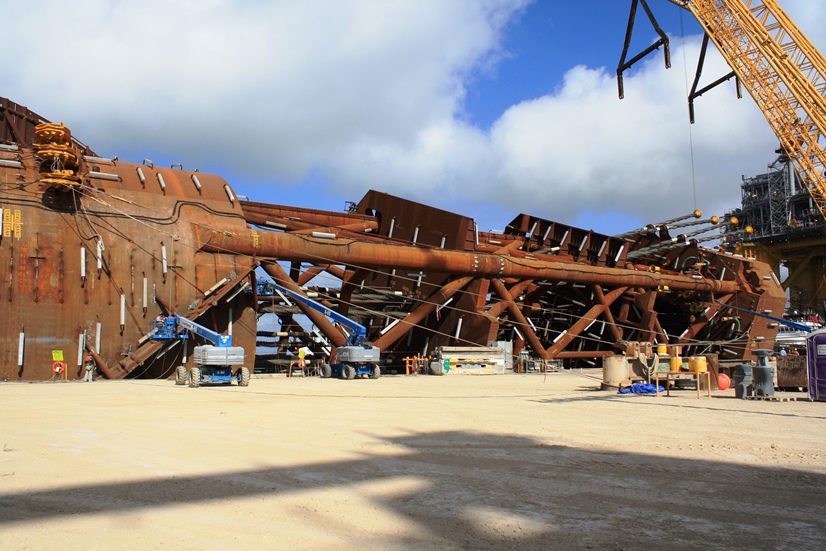 Next month the spar is scheduled to be towed to the Lucius field in the Gulf’s Keathley Canyon block, about 340 miles southeast of Corpus Christi. Jennifer Tule, an Anadarko project manager for the Lucius project, says setting the spar – getting it vertical and secured to the seabed nearly a mile and a half down – will take three to four weeks in August and September.

Then the topsides – 16,000 tons of work decks for oil and natural gas processing equipment, living quarters for the workers and other features – will be placed on top of the spar in the first quarter of 2014, with production expected in the second half of 2014. “It by far will be the biggest spar we have in the Gulf,” says Darrell Hollek, senior vice president for operations in the Americas. A shot of the Lucius topsides being assembled in Kiewit’s yard, about 100 yards from the spar:

To say Lucius will be Anadarko’s biggest spar project ever is saying quite a bit. The company has more than 150 deepwater projects – that is, at depths greater than 3,000 feet. It began production from its Caesar/Tonga platform in the first quarter of 2012. A Lucius twin, Heidelberg, will be next with production scheduled to begin in mid-2016.

A Lucius/Heidelberg schematic (click here or image below to see large sized image):

It’s all about finding energy. The Lucius field was discovered in late 2009. Anadarko geologist Shandell Szabo says oil is deposited in sandstone layers, resulting from material transported over time by river systems into the Gulf:

These systems occur at depths equal to about three Empire State Buildings below the seafloor. Just a few wells are needed to extract the resource. Lucius will initially have six. Szabo calls it a “world-class reservoir.”

After discovery, wells are drilled – sometimes over several square miles – that can be serviced by a single production platform like Lucius. Anadarko’s John Christiansen calls it the “hub-and-spoke philosophy” that ultimately saves infrastructure costs. Over time, the Lucius platform might be tied into other oil and natural gas plays. Already it is scheduled to process natural gas coming from the South Hadrian field belonging to ExxonMobil, one of a number of partners on Lucius.

The spar consists of a hard tank, and a soft tank at the bottom, which includes a truss section with heave plates, Tule says. The keel tank can hold 18,000 tons of fixed ballast that creates stability in the ocean. The spar will be anchored by nine mooring lines – a combination of 6-inch diameter chain and 10-inch diameter polyester ties – attached to suction piles embedded in the seabed.

The spar is festooned with aluminum anodes to counter corrosion, as well as spiral-like strakes that offset eddies created by the ocean currents. Here’s how they look:

Once vertical and secure, the spar will be ready for 400-foot cranes to put the topsides described above in place. Don Vardeman, Anadarko vice president for worldwide projects:

"One of the fun facts here, as you think through this, is you’ve got a floating spar there and topsides  held by a floating vessel, and you’ve never had an opportunity to check the dimensional tolerance or the dimensional accuracy between the (spar’s) standing points and the topsides. So that’s the first time you get to fit those two together.”

Fully constructed, the facility is designed to withstand a 44-foot wave, Tule says. It will be home and “office” for 15 to 20 permanent workers.

In brief, that’s how Anadarko and its partners are bringing the Lucius platform together. Critical is the company’s commitment to safety – especially for its employees and the environment. Certainly, infrastructure of such overwhelming size is a credit to modern engineering generally and to our industry specifically – in terms of extending oil and natural gas development to the tremendous depths Anadarko and other companies are pursuing.

There’s also something to be said about human capital, the highly skilled workforce at Anadarko and throughout our industry – including the army of workers at fabrication yards like Kiewit’s – that knows what it’s doing on projects of such enormity. Vardeman: