“The work of this conference – your work – is so essential. It is so important to assure that this oil resource, this great energy resource, is traveling the world’s sea lanes and other transportation lanes, that they travel safely, transporting energy and the benefits that come with it to people all around the world.”

Yergin and Karen Purnell, managing director of the International Tanker Owners Pollution Federation (ITOPF), noted the significant reduction in tanker incidences the past four decades show how advances in training, technology and overall preparedness have made oil transport safer. An ITOPF chart: 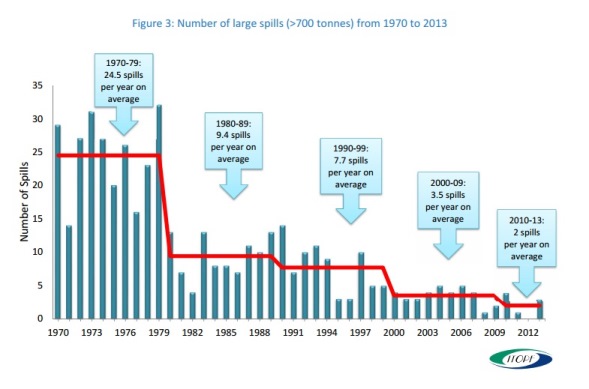 The improvement comes even as tanker use, measured in tonnage, has grown 85 percent since 2000, Yergin said. Twenty-eight percent of all water-borne cargoes is oil. Yergin:

“It’s just extraordinary to see the drop in tanker incidences that has occurred. … Why has it happened? It’s the response of the tanker industry, the people who build them, the oil industry, all of you… the fleet has changed. At the time of the Exxon Valdez, the average age of the fleet was 15 years, now it’s nine years. Single-hulled tankers are gone. We see the improvements in hull design.”

Yergin said growing energy production in the Western Hemisphere – bolstered by the U.S. revolution in unconventional development from shale and other tight-rock formations with advanced hydraulic fracturing and horizontal drilling – is changing the global energy and political balance:

“Technological innovation is really bringing what we call the unconventional revolution into the mainstream. We have a great revival going on in the Western Hemisphere, and we see Eastern Hemisphere suppliers scrambling to adjust. It’s changing the political alignments. More oil flows through the Strait of Hormuz to China than to the United States.”

Yergin said sustained emphasis on safety and responsiveness if an incident occurs is critical to maintaining public support for energy development:

“I think part of it is a better understanding (of issues). … There are real issues that need to be managed – water issues need to be managed, we need innovation, we need to work on (these issues). I think that kind of discussion is a contribution. … There’s not a master answer to what is a very important question, but it’s to take it very seriously and to seek to be out in front of it and to work with the regulators to address the questions.”