What makes you happy? Good health? A pleasing career, your family’s well-being, realizing dreams? There are many things we could list that lead to happiness. One of the glories of America is that it’s up to us as individuals to choose – the search for happiness being fundamental to what it means to be an American.

To help celebrate Independence Day on the Energy Tomorrow Blog, we’ve been talking about the relationship between energy and basic, endowed rights – life, liberty and today: the pursuit of happiness.

Earlier this year, API President and CEO Jack Gerard talked about a unique opportunity through energy to do good, to provide for basic human necessities, to foster well-being:

“Fundamentally, we have a choice as a generation, as a nation and as an international community to rise to the challenge of meeting the energy needs of a growing worldwide population or to shrink from it. The fact is fossil fuels will continue to take the lead in providing most of the world’s energy needs well into this century. … We have a once-in-generation opportunity to show the world how energy abundance can be used as a positive force rather than as a tool to harm or to control other nations as some still use their energy abundance. … Our vision of the world is one where more and more people have access to reliable, safe and affordable electricity, no matter which continent or hemisphere they call home. Our vision for our nation’s energy future is inclusive, realistic and above all rooted in the belief that energy’s fundamental role in our society is a positive that should be encouraged …”

Gerard’s remarks are based in large part on this: However you define happiness, the chances are pretty good that energy plays an important role in reaching it.

Think about it: Energy takes us places. It fuels the mobility that usually is a key to realizing happiness – whether it’s reuniting with family, getting food, clothing and other things we need, reaching work, school, hobbies, sports events, other entertainment and more.

Let’s talk health: Energy is essential to warming and cooling our homes. Medicines are made from petroleum – as are lots and lots of other products that are important to every-day life and happiness.

Working at good jobs is important to life and happiness. Energy development itself supports jobs – direct, indirect and induced jobs. Meanwhile, you’d be hard-pressed to name very many, if any, places of work that don’t need energy – for power and/or to make the things they make or to provide services. Work supports our lives and helps us realize aspirations … and happiness.

Let’s look at a couple of charts. Earlier this week we posted the one below from Max Roser’s Our World in Data project, showing real GDP per capita around the world since 1600, measuring individual wealth and prosperity: 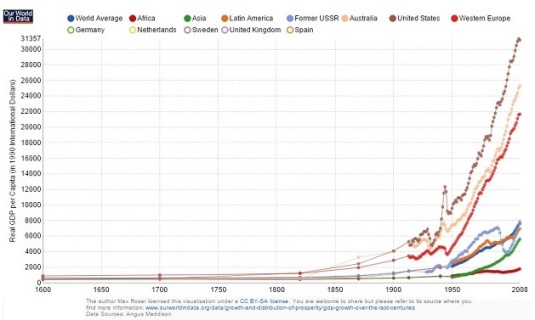 Two things stand out: First, the dramatic increases over the past century, across virtually the entire globe; and second, the fact that the United States leads all other nations. Now this chart, from the U.S. Energy Information Administration: We see how fossil fuels – coal, oil and natural gas – have been responsible for the vast majority of the energy used by the U.S. since 1850, which coincides with the dramatic climb in U.S. per capita GDP shown on the previous chart. We’re talking about energy for individual lives, for jobs and for the economy – energy that is generating individual and national prosperity. And, while prosperity doesn’t automatically equate to happiness, it usually helps.

Let’s close with an illustration. A number of people enjoy fly fishing. It makes them profoundly happy to wade into a mountain stream and fly-cast for hours on end. Shoot, Robert Redford once made a film about it.

Now, check the infographic below. It depicts how vital petroleum- based products are to fly fishing. Indeed, from a fly fisherman’s head to his or her wader-encased toes, petroleum makes this pursuit of happiness comfortably possible.

We say comfortably possible, because you can go fly fishing without petroleum-based equipment. But that infographic would be NSFW, right? That’s just fly fishing, we could go on and on showing the link between energy – and specifically, oil and natural gas – and activities, avocations and enterprises that bring happiness.