Our series highlighting the economic and jobs impact of energy in each of the 50 states continues today with Vermont. We started the series with Virginia on June 29 and reviewed Hawaii and Idaho to begin this week. All information covered in this series can be found online here, arranged on an interactive map of the United States. State-specific information across the country will be populated on this map as the series continues.

As we can see with Vermont, the energy impacts of the states individually combine to form energy’s national economic and jobs picture: 9.8 million jobs supported and $1.2 trillion in value added. 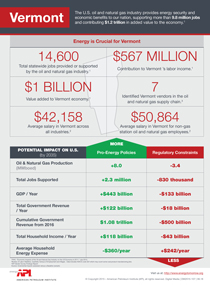 Click on the thumbnail to bring up a two-page snapshot of energy’s benefits to Vermont.

The top-line numbers for Vermont: more than 14,000 jobs supported statewide, according to a PwC study issued in 2013; $1 billion added to the state economy; $567 million contributed to the state’s labor income.

Page 2 of the document highlights that crude oil exports represents promising economic opportunities for Vermonters and all Americans. We’ve now seen reports -- from Columbia University, IHS, ICF, Brookings, the Aspen Institute, the Government Accountability Office, the Congressional Budget Office, the Energy Information Administration (EIA) and others – all pointing to the same conclusions: Blocking trade in crude oil harms consumers, it harms the economy, and it undermines America’s role as a global energy leader.

Crude oil exports would put downward pressure on U.S. gasoline prices. U.S. weighted average petroleum product prices are expected to decline as much as 2.3 cents per gallon 2015–2035 when U.S. crude exports are allowed. The greatest potential annual decline is 3.8 cents per gallon in 2017. These price decreases for gasoline, heating oil and diesel could save American consumers up to $5.8 billion per year, on average, over the 2015–2035 period.

Energy is critically important to Vermont, serving as a key engine for the state economy – expanding job opportunities and offering the hope of prosperity to individual Vermonters and their families.

The future benefits of energy for Vermont – and the rest of the country – largely depend on national decisions on the country’s energy path. A new Wood Mackenzie study contrasts the benefits that a set of pro-development policies could have on energy supplies, jobs, the economy and American households with the likely negative effects on energy of regulatory constrained policies. The key comparisons are found on the first page of the linked document.