A Look at Our Energy Tomorrow A couple of the big-picture projections in ExxonMobil’s annual global energy outlook: The world’s energy needs will grow 25 percent between now until 2040, with oil, natural gas and coal continuing to meet 80 percent of that demand.

Now, read what the energy company says about the future of natural gas:

The biggest expected growth will be in natural gas, which provides a practical energy solution for many applications while also providing a significant cost advantage versus other options to help reduce climate change risks.

This basically describes the “U.S. Model” we’ve been talking about for a number of weeks. It’s a model that includes increased natural gas and oil production – lifting our economy and benefiting American consumers – that also leads to significant climate progress. This model isn’t energy theory. It’s the current U.S. energy reality.

Thanks to the American energy revolution, the U.S. is the world’s leading producer of oil and natural gas. The revolution is helping U.S. consumers in the form of lower energy costs, and it is strengthening American security by lowering oil imports. As for climate, increased use of natural gas is a chief reason the U.S. is leading the world in reducing energy-related carbon emissions.

It’s a proven model, one that can continue to work in the years ahead. ExxonMobil sees the world shifting to cleaner fuels for its electricity out to 2040: 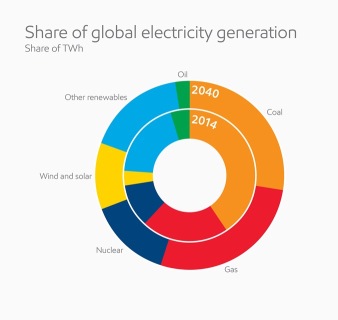 Natural gas leads the way with nuclear, wind and solar gaining share and coal declining (from 40 percent in 2014 to 30 percent in 2040). The world will need all “economic energy sources” going forward, ExxonMobil says. More:

We can expect that new technologies will continue to create new energy options for our growing world. We don’t know yet what all those technologies will be, but history tells us that the best ones will be affordable, available on a commercial scale, and not overly reliant on government support. Enabling these technologies will require policies that promote innovation, investments and free trade.

Natural gas is affordable, reliable and clean-burning. Safe hydraulic fracturing and horizontal drilling have made it abundant. The natural gas approach is market-driven, which is why the U.S. Model works so well to advance climate objectives that some think require government command-and-control solutions. Not so.

Check out this chart from ExxonMobil’s forecast, comparing carbon dioxide emissions reductions in the U.S. and Germany: As ExxonMobil’s report notes, the two countries show how different paths can reduce CO2 emissions from power generation. The U.S. has shifted to natural gas use with much smaller growth in wind and solar. Germany targeted rising use of wind and solar and phased out nuclear power. Both countries’ power sectors cut CO2 intensity, but the United States dropped about three and a half times as much as Germany from 2005 to 2012. API President and CEO Jack Gerard, from his speech last week at the U.S. Energy Association’s State of the Energy Industry forum:

The U.S. Model “recognizes that market forces, driven by consumer preferences, are far better able to achieve our nation’s energy, climate and economic goals than government mandates and regulatory dictates. … [T]o sustain and build on our nation’s positive energy trajectory our energy policies should foster – or at least not hinder – America’s ability to explore, develop, transport and deliver to consumers the energy they need to heat their homes, run their businesses and enjoy their lives.”

The U.S. Model is working and will continue to work with policies that foster access to energy reserves for safe and responsible development, fair and efficient leasing and permitting policies on federal lands and a common-sense approach to regulation that doesn’t pile on unnecessary layers of federal regulation that could chill energy investment.

“Another duplicative rule at a time when methane emissions are falling and on top of an onslaught of other new BLM and EPA regulations could drive more energy production off federal lands. That means less federal revenue, fewer jobs, higher costs for consumers, and less energy security. The goal is to prevent emissions, not impede U.S. energy production.”