Our industry is committed to helping America’s veterans who’re looking for civilian jobs after finishing their military service. This week API and Vets4Energy unveiled a new web tool that should help veterans match their skill sets with those needed in the energy industry. Likewise, the site will help employers looking for military occupations that could factor into their hiring needs.

The new web tool is timely, with more than 1 million military service members expected to transition to civilian life over the next four years, according to the new site. More than 8.4 million current military veterans are under the age of 60. 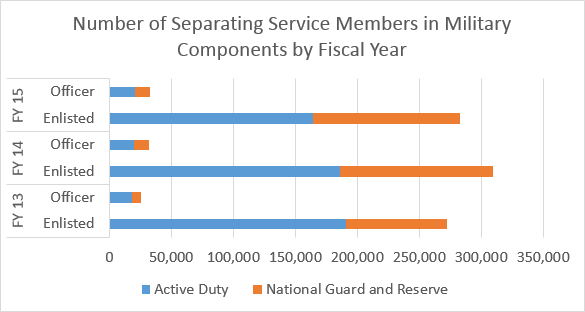 Below, a chart from Vets4Energy’s website that shows the percentage of enlisted personnel leaving the military in fiscal year 2015 by occupational category: “[A]s we look out into society in general and specifically among veterans, what we are finding is that many individuals would love to work for the oil and gas industry but they’re not quite sure how to get there. … It’s our hope that this translator tool will create more of this opportunity to our veterans, give them an opportunity to serve, to work in the industry.”

Loren said the tool is the result of a variety of inputs and that it will evolve and adapt to meet the needs of veterans and potential employers. The opportunity for civilian employment after a military career is part of the compact the country makes with those willing to serve, he said. Loren:

“Our primary focus is to … remind everyone that our energy policies are inextricably linked to our national security. No energy policy can be taken without the consideration of our national security. That said, a significant element of that national security is veteran employment – not only in recognition of what the sons and daughters of America that have worn the cloth of the nation have given to the nation – but recognizing … that there is a vast pool of disciplined and educated and trained and conscientious men and women who have served the nation and are ready to move on into industry. What better way to promote a sound oil and natural gas energy industry than to incorporate these skills, these experiences into that environment? This is a win-win situation for everyone...”