“The House Armed Services Committee’s passage of LNG exports legislation is the latest example of bipartisan recognition by Congress that the U.S. is an energy superpower. … It’s time for our nation to fully embrace the economic and geopolitical opportunities unleashed by the energy renaissance. Accelerating exports of U.S. LNG ensures that consumers across the globe have access to stable, diverse energy supplies, protects America’s role as a global energy leader and further enhances national security in the homeland.”

Certainly, bringing home recognition of the U.S. energy renaissance and its benefits to policymakers in Washington is critically important. Sustaining and growing the domestic surge in oil and natural gas production depends on forward-looking leadership and sound policies.

No less critical is increasing Americans’ buy-in on the golden opportunity to foster economic growth well into the future, create jobs, produce consumer savings and strengthen U.S. standing in the world, all thanks to more home-grown energy – and all occurring as the United States leads the world in reducing carbon emissions. This U.S. example of concurrent energy and economic growth and climate progress – through wider use of abundant, clean-burning natural gas – was central during a discussion this week in Houston hosted by the Center for Energy Studies at Rice University’s Baker Institute, LNG Allies and the Embassy of the Czech Republic. The U.S. Energy Department’s Christopher Smith, assistant secretary for fossil energy, lauded the start of U.S. shipments of LNG to overseas buyers from Cheniere’s Sabine Pass export terminal in Louisiana. Smith called it “inspiring” and said a growing U.S. presence in the world market reflects the “entrepreneurship and the innovation of American companies and American workers here in the United States.” Smith said the new U.S. presence in global LNG trade is having immediate impact:

“We’re seeing the very first cargos exiting the United States, but this process – the export of LNG, the tremendous abundance of shale gas we have in the U.S. – is already having a big effect on markets around the world, just the fact that that gas is available … Those cargos that otherwise would come to the United States are being diverted to other markets is having a big impact on energy security of our allies.”

Smith talked about the recent Paris climate accord and said natural gas is a key to reaching emissions objectives:

“Natural gas is going to play an important role in this. A big part of the reduction in greenhouse gas emissions that we’ve been able to manage in the United States is due to the fact that as we’ve had greater access to natural gas, as we’ve demonstrated we’ve got trillions of cubic feet of natural gas that we are going to be able to produce safely, and our domestic supply has gone from one of scarcity to one that has enabled us to use more natural gas in baseload power consumption” that is reducing greenhouse gases. The Rice center’s Kenneth Medlock said the climate argument for U.S. natural gas isn’t yet being fully advanced by officials:

“I’ve got to admit with Paris, the COP21 meetings, I was a little surprised that more wasn’t made of what the U.S. could potentially do in terms of promoting CO2 emissions reductions in countries that really don’t have much of a gas presence, because there is a massive amount of natural gas, not just in the U.S. but also in Canada and longer term in Mexico. When you think about North American presence and what it means for global energy aspirations, one that involves a lower carbon energy future is one where you really do have to think about natural gas. … Gas, suffice to say, has to be a really critical piece of the puzzle. And then you start looking at alright, if that’s the case, where does it come from? … It’s kind of hard to turn your eyes away from North America and the U.S. in particular.”

Medlock said the U.S. experience can be replicated by other countries, other economies:

“When you think about other countries meeting certain goals that are related to CO2 emissions, those aspirations could largely be fulfilled by a greater U.S. presence, particularly in the natural gas domain. I think that’s a talking point that’s been missed in the political domain for whatever reason. But I think it’s one that will come increasingly into the fold. It might be one of those issues you kind of have to see the train coming before you know it’s coming. And with the opening of Sabine Pass, I think the train has literally left the station. I think a lot of countries are going to start to reevaluate how they actually approach certain climate goals and what U.S.-sourced natural gas might mean. I think long-term this has the potential to be everybody’s transformative, as what we’ve already seen in the United States with regard to our own CO2 emissions.” Here in the United States, harnessing the U.S. energy opportunity largely hinges on Americans from policymakers on down recognizing that the U.S. has a once-in-a-generation chance to get its energy approach and energy policy right. R. Maynard Holt, co-president and co-head of investment banking for Tudor, Pickering, Holt & Co., said other countries wonder if the United States understands what has happened with its own energy renaissance, in terms of lower costs and emissions, Holt said. Others see the U.S. as an emerging energy power and the U.S. energy sector as a strong investment. Holt:

“The U. S. model is unique. … Globally, over the next five, 10, 15, 20 years North America … is becoming an increasingly important part of the energy equation. It’s not diminishing, it’s not going sideways, it’s going up. The main reason I would say is that of all the clients we have, I don’t have a single client who looked up in this current downturn and said, ‘Oh, man, I wish I had done more business in Angola.’ The world’s friendliness toward energy investment – lets you put your money in, lets you get your money out, a framework you can depend on and so forth. Lots of discussion right now about Iran and those barrels and how that’s going to affect supply. Well, who’s going to put that money in? I wouldn’t want to market that versus marketing Texas.”

Holt said the flipside to localized opposition to LNG exports, again, is based on opportunity – opportunity others see sometimes more clearly than we do in the United States:

“The U.S. has a breakout move here, that’s been handed to us as an economy. … Imagine, for example, if for some reason labor costs suddenly dropped in half, or real estate costs dropped in half – pick your big variable. So one of the inputs has suddenly been cut dramatically. … The real question was, the U.S. has a breakout move here, and what could we do to improve the other things that go into deciding if you’re a global company, where you’ll locate a plant. What could we do, whether it’s the corporate tax rate, whether it’s other regulation, whatever it is, the U.S. was handed an unbelievable (edge). If it was a card game it was the ace of spades.” 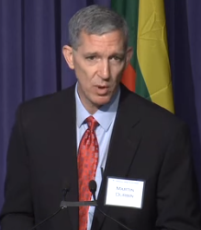 Marty Durbin, API’s executive director for market development, said there’s a need to make the compelling case of U.S. energy with more and more Americans. We need a national conversation because a vocal minority is targeting the very natural gas development that’s largely responsible for U.S. carbon reductions. The Obama administration has an important role to play. Durbin:

“Frankly, the federal process has not been the issue. … The problem is all on the ground. … I do believe the administration, if they want to achieve the goals they’ve laid out – economic, emissions reductions, climate legacy, call it what you want – they need to be able to stand up and more forcefully say yes we have to do it safely, yes this pipeline has to be built responsibly, but we have to do it. And it is safe and manageable.”