Canada – Our Partner in Energy

Happy Canada Day! Here in the U.S., if you’re not already celebrating with our friends to the North, think about starting. Canada is much more than a good neighbor. 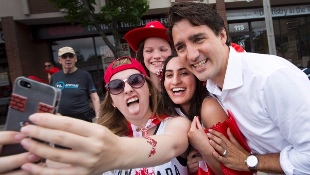 Canada always has had America’s back (well, except for that War of 1812 thing). The best hockey players on the planet come from Canada, and their new prime minister is, well, pretty photogenic, eh? (Photo: Peter Power/Canadian Press)

OK, seriously, we celebrate with the Canadians because Canada is vital in terms of trade and energy security. The U.S. is Canada’s largest trading partner, with more than $750 billion in goods and services crossing the border a year, as the U.S. Chamber of Commerce details in this blog post. For example, Canada is a huge, huge destination for U.S. agricultural products.

Yet, in energy Canada and the U.S. are even more closely intertwined. Canada surpassed OPEC as our leading supplier of imported oil in 2015, the U.S. Energy Information Administration (EIA) reports:

Indeed, Canadian crude imports are vital to U.S. energy security – energy from a friendly, trustworthy supplier. And destined to play key role in the future. During the Keystone XL pipeline debate the U.S. State Department said heavier crudes from Canada’s oil sands, which a number of U.S. refineries are configured to process, would be needed to make up for falling volumes of heavy oil from Venezuela and Mexico:

So, thank goodness for Canada’s own energy revolution:

Certainly, the need for Keystone XL remains, but the State Department said Canadian oil would get to market somehow, and it has:

So, here’s to Canada – our neighbor, ally and friend.