A handful of stats stand out about New York state and energy: First, among the 50 states New York was the fourth-largest consumer of natural gas in 2014, according to U.S. Energy Information Administration data. More than half the state’s households heat with natural gas. New York also ranked fourth in the country in the use of natural gas for net generated electricity. 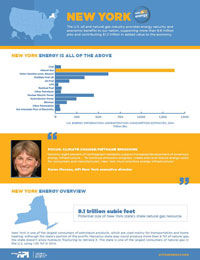 Click on the thumbnail for a two-page energy infographic for the Empire State.

The good news is a big part of New York sits atop the prolific Marcellus shale play, which could hold more than 9 trillion cubic feet of natural gas, according to one estimate. The unfortunate reality is that state leaders continue to leave in place a ban on hydraulic fracturing used to produce gas from shale. The result is that most of the natural gas New York uses comes from Canada and other states, including its Marcellus neighbor, Pennsylvania. This helps explain why New Yorkers pay some of the nation’s highest prices for electricity.

Certainly, access to domestic natural gas and oil reserves is one of the keys to sustaining and growing America’s energy revolution, which has seen the U.S. become the world’s largest oil and gas producer. Obviously, the lack of access to available resources is keeping New York at arm’s length from the benefits of the energy renaissance – energy, jobs, economic growth. Page 2 of the New York infographic includes a chart contrasting the benefits of a pro-development path for the nation with the potential negative impacts of an approach characterized by regulatory constraints.

Energy is essential for virtually every aspect of our daily lives. It powers national, state and local economies, gets us to work and goes into products we rely on for health and comfort. Safe, responsible energy development here at home is linked to national security as well as Americans’ individual prosperity and liberty – in New York and all the 50 states of energy.