Pipelines For Energy and… Beer? 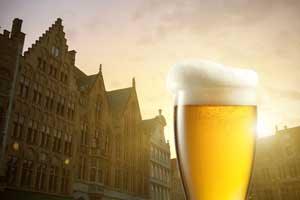 The benefits of pipeline infrastructure are being felt in one small Belgian city. Only get this: The deliverable is beer.

The Halve Maan Brewery in Bruges recently opened a beer pipeline connecting the brewery in the center of the town to a bottling plant about 2 miles away. The $4.5 million pipeline that took five months to build can deliver 12,000 bottles of beer an hour to the bottling plant. Not only will the pipeline increase efficiency in delivering this product to market, but its multi-million dollar construction likely provided an economic boost to the area.

The Bruges pipeline illustrates the way pipelines play a big role in putting valued products in the hands of consumers. In Bruges, it’s beer. In our country pipelines crisscross the nation, safely bringing crude oil to refineries and then finished petroleum products to market every day – with 99.999 percent of deliveries reaching their destinations without incident. That’s just one benefit of strong energy infrastructure.

America’s pipeline systems benefit American consumers, American workers and the environment. Pipelines play a role in our nation becoming the world leader in producing oil and natural gas and also in reducing carbon emissions which are near 20-year lows.

Meanwhile, U.S. consumers saved more than $115 billion on gasoline in 2015 compared to 2014, according to AAA, with each licensed driver saving an average of $550 at the gas pump.  That’s largely because we’re producing more oil here at home.

Pipeline construction is beneficial in a broader economic sense as well. According to a recent IHS study,  development of new oil and natural gas infrastructure could generate an estimated $1.15 trillion in capital investments and support as many as 1.15 million jobs.

Whether it’s bringing beer, crude oil or petroleum products, pipelines provide great benefits to our economy and each of us as consumers. So, when you’re topping off your car’s tank before a long road trip – or if you’re ever sipping a Halve Maan beer – think pipelines. It’s infrastructure we all need.

Before joining API as a spokesman, Tadeo served as the deputy communications director for the Senate Energy and Natural Resources Committee under Chairman Lisa Murkowski of Alaska. Tadeo’s communications experience includes his work on Capitol Hill with Rep. Bill Johnson, the House Natural Resources Committee, and with Fox News in New York where he was a producer for Neil Cavuto. Tadeo is a graduate of Fordham University.