We’ve talked quite a bit about the way America’s energy renaissance is benefiting consumers, supporting the economy, strengthening our security, reducing U.S. energy-related carbon emissions to 25-year lows and bringing overseas wealth into this country through the export of crude oil and natural gas.

There’s even more: U.S. exports of refined petroleum products are soaring. Here’s a chart developed from U.S. Energy Information Administration (EIA) data, showing that exports of refined products have more than doubled in the past decade to about 3 million barrels per day: 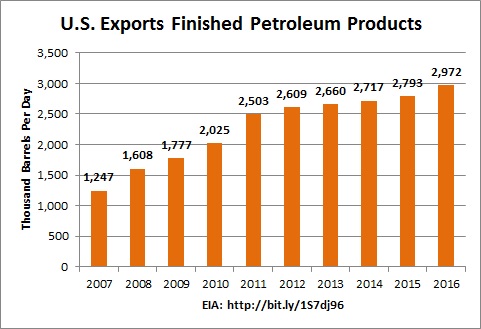 This reflects both demand from markets abroad and the ability of the U.S. refining sector to produce an abundance of finished goods with global appeal. Overall, it’s another “win” for U.S. energy. Bloomberg goes so far as to depict the United States as the world’s refiner:

From major producers such as Chevron Corp. to specialized refiners including Valero Energy Corp., the U.S. refining industry has shifted its game over the last five years, taking advantage of gaps left by struggling refiners in Latin America, Africa and Asia. Along the way, it’s transforming what had long been a largely domestic business into a new global venture. “U.S. refiners are now the refiners for the world,” said Ivan Sandrea, head of Sierra Oil & Gas, which is planning to build infrastructure to import U.S. fuels into Mexico.

The Bloomberg piece notes that exports of gasoline are leading the surge, with those exports nearing 1 million barrels a day in December, an all-time high:

Exports of other refined products also have risen significantly, including propane and propylene: Again, this is one benefit of the U.S. leading the world in oil and natural gas production. Thanks to surging oil production from shale, made available by safe hydraulic fracturing and horizontal drilling, U.S. refiners are turning out an abundance of finished products, meeting domestic needs while also supporting exports. This helps the U.S. in terms of trade and stimulates additional output here at home. Bloomberg points out some global implications from America’s energy muscularity:

The export boom, together with surging domestic shale oil output, has redrawn the global energy map. The U.S. a decade ago reported annual net imports of crude and refined products of 12.4 million barrels a day. Last year, it received a net 4.8 million barrels a day, the lowest since 1985. In late 2016, the U.S. exported more crude and refined products to Latin America than it imported from the region – a first.