They’ve been running races at the Indianapolis Motor Speedway since 1909.

The track, home of the iconic Indianapolis 500, a staple of the Memorial Day weekend, is still called “The Brickyard,” for the 3.2 million paving bricks that were laid down in the fall of 1909 as the track’s first modern surface. One of the first things first-time speedway goers may notice is that The Brickyard has very few bricks left – only a 36-inch strip at the track’s start-finish line. The speedway’s modern asphalt skin is among the ways energy makes the Indy 500 the racing spectacle it is today. It wouldn’t be the Indy 500 we know today if it were still run over 2.5 miles of bricks – as it was in 1911, when winning driver Ray Harroun averaged 74.59 mph in his Marmon “Wasp” racer. That’s positively quaint compared to last year’s winning average of 166.64 mph logged by Alexander Rossi, traveling nearly the length of a football field every second. Because of asphalt, a viscous liquid or semi-solid form of petroleum, drivers are able to maneuver over a smooth surface with much better traction than was available in Harroun’s day. 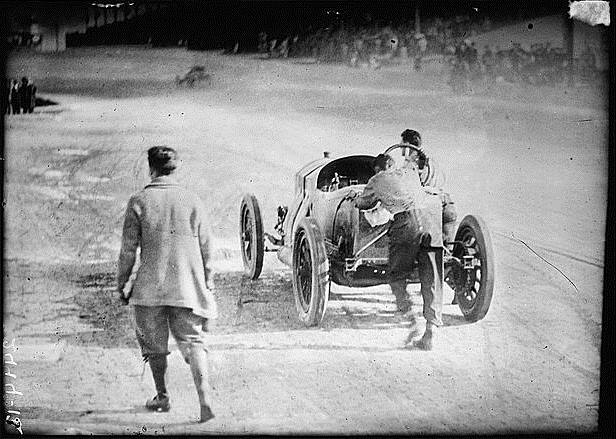 Many consider Indy cars to be high-speed works of art. With the carbon fibers and Kevlar, a polymer derived from petroleum, that go into a racing chassis like the Dallara model Rossi won in last year, you could say it’s art made possible with petroleum.

Indy car fuel, obviously, is made from refined crude oil. All 33 of the cars that challenge the speedway each year receive 130 gallons of Sunoco racing fuel, specifically designed for racing engines (not the family SUV). Stored in dark, tightly sealed containers at stable temperatures, the fuel’s non-ethanol portion is comprised of highly refined hydrocarbons for stability and consistency, according to Sunoco – something to ponder during the seven seconds it takes for a driver’s skilled pit crew to fill up his racer with 18.5 gallons of fuel.

Still, an Indy car – aerodynamically designed, with advanced technology and specially formulated fuel – would go nowhere without reliable Firestone Firehawk racing tires, also made from petroleum. These tires are made from a wet rubber compound that provides improved stopping distance. And for every tire manufactured, about 7 gallons of oil is needed. Considering Firestone produces 5,000 tires for the Indy 500, that’s 35,000 gallons of oil just to keep tread on the wheels for a single race. Fire-resistant clothing and other protective gear for drivers come from petroleum, too. Equipment has come a long way from the days of leather skull caps and goggles. Spherical helmets use a variety of materials to enhance protection, including an ultra-light, carbon fiber shell, which is made using rayon or petroleum pitch. One of the most important helmet features is the Nomex lining, a high-temperature-resistant fiber that provides a protective barrier in case of fire. In fact, a driver’s entire outfit, from the headsock to the gloves to the underwear and one-piece suit are all made using Nomex, a synthetic aramid polymer made from petroleum.

The Indy 500 is an event full of traditions. It’s Indiana’s premiere spectator event, boosting the local economy with tourism as people from all over the country and the world gather to grab one of the Indianapolis Motor Speedway’s 235,000 reserved seats. Like so many other events and happenings in modern American life – ranging from the grand to the routine – the Indy 500 is all about energy.