Tennessee: Energy – Music To Your Ears

When country music superstar Brad Paisley steps out onto “The Circle” at the Grand Ole Opry House in Nashville, it’s pure Tennessee – Paisley adding to the state’s storied country music legacy as he strums the strings of a Gibson J-45, an instrument produced by the Nashville-based Gibson Guitar Corporation. Also playing an accompanying role: energy. 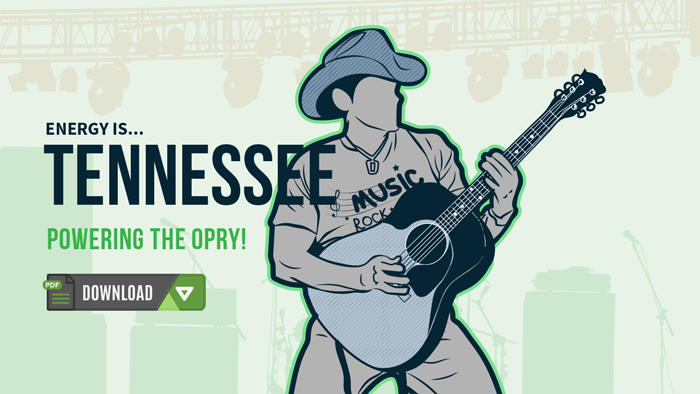 Consider the Opry as an attraction, with energy helping illuminate, amplify and make folks comfortable. Consider also the finely crafted, exquisite guitars with which Paisley and other country artists make their music. There are a number of guitar makers, but since Paisley uses a Gibson, let’s illustrate with that.

Gibson manufactures legendary American products. And for many of the Grand Ole Opry’s stars, Gibson is an instrument of choice – from modern-day artists like Paisley and Darius Rucker, to the legendary “Father of Bluegrass,” Bill Monroe, who favored a Gibson F-5 mandolin. Now, when you think of Gibson guitars you might not think of natural gas and oil, but their versatility is instrumental for the company to continue producing its iconic line.

From the gasoline and diesel that power the equipment that plant, harvest and transport the wood used in their construction, to kilns powered by natural gas or electricity to dry the wood to a perfect moisture content, Gibson is able to transform raw spruce, maple, mahogany and rosewood into its exemplary guitars. They range in price from as much as $11,499 for a custom model to $4,159 for a model like Paisley uses to as low as $399 for guitars the rest of us can strum around on. So you don’t have to be a member of the Grand Ole Opry elite to enjoy a Gibson, as their iconic Les Paul line also is preferred by would-be rockers from Ventura, Ca. to Long Island, NY. Petroleum-based polyurethanes produce the gleaming finish on many of Gibson’s guitars, giving them a strong and durable coat that will last a lifetime of playing. These polyurethanes are a result of modern refining, which takes crude oil and transforms it through processes that include separation, conversion and treatment to produce fuels, clothing fabrics, durable polymer plastics and more – including the fancy finish on a country music star’s guitar.

Gibson’s guitars – and the artists playing them – take center stage at the Opry. Each year, millions of people spend their summer vacations in the “Music City,” soaking up its southern charm and hearing country melodies as timeless as those by the Carter Family and as hip as those from Paisley. Whether they travel to the city by car, bus or airplane, they depend on gasoline, diesel and jet fuel to make it to their destination.

But that’s just part of the story. Natural gas and oil are there at every step, taking musicians and their talent to the ears of those visiting Nashville and millions more listening at home.

Since it began on Nov. 28, 1925, as “The WSM Barn Dance,” electricity has sent the chords of the Opry’s stage out to millions of listeners worldwide via radio. And with natural gas today providing nearly 11 million megawatt hours of the state’s electricity in 2016, it is an important resource for ensuring the lights stay on at the Opry and that listeners enjoy the sounds of this cultural institution.


Each summer, hundreds of thousands of people fill the 4,400-seat Opry House for its live Tuesday, Friday and Saturday evening broadcasts. And from the comfort of their pew-style seats, which pay homage to the Opry’s historic and winter home, the Ryman Auditorium, they enjoy a 21st century music experience of electricity-powered lights, amps and speakers giving an unparalleled crispness to the 20th and 19th century songs and hymns being played onstage.

While in town, many of those seeing the Grand Ole Opry stay next door at the Gaylord Opryland Resort & Convention Center, which with its 2,882 rooms and dozens of restaurants and shops, uses electricity to power its lights, and natural gas to heat rooms and water and to cook the thousands of “vacation of a lifetime” meals.

So whether you are among the lucky ones enjoying a summer evening inside the Grand Ole Opry House itself, or, like most, listening on the radio, the ability of those legendary voices and tunes to greet your ears is all thanks to energy.