This week members of the U.S. Senate will consider legislation that would serve to expand the presence of E15 fuel in the marketplace. Unfortunately, the bill is a distraction from fundamental problems with the Renewable Fuel Standard (RFS), which is forcing more and more ethanol into the nation’s fuel supply. Research has shown higher ethanol blends, such as E15, could damage vehicle engines and fuel pump systems, socking consumers with the repair bills. The RFS needs to be repealed or significantly reformed, to protect U.S. consumers.

As EPA prepares to announce ethanol mandates for 2018 under the RFS, API Downstream Group Director Frank Macchiarola briefed reporters on the flawed program:

“You can mandate anything you want … but that doesn’t change the underlying problems with the RFS. … Fuel needs to be ready for prime time – not just for the retailer, but for the consumer. … We need to make sure before we put fuel into the marketplace that it’s ready for prime time. …. E15 just doesn’t meet the mark on those questions.”

As drivers hit the road for their summer vacations, it is important that the American consumer is provided with a real choice in the fuels they use. The oil and natural gas industry and the refiners who help fuel America want to make sure that Americans get the fuels they need and want. At tomorrow’s hearing on S.517, the Consumer and Fuel Retailer Choice Act, senators should find a lasting solution to the broken Renewable Fuel Standard instead of spending time on E15 legislation that does not fix the problem or help consumers.

The Consumer and Fuel Retailer Choice Act gives a false choice to the consumer as  85 percent of vehicles in the U.S. fleet were not built for E15 and it is not compatible with motorcycles, boats, lawn equipment, and ATVs.

The choice offered in this bill is a bad one. Consumers don’t benefit from E15 gasoline. The fuel was inadequately tested by EPA and could harm engines and fuel systems. Testing by the Coordinating Research Council (CRC), which has been the gold standard in fuels and engines research for the better part of a century, determined that many vehicles on the road today could suffer engine damage from using fuels containing higher levels of ethanol than their designs can accommodate. Likewise, a separate CRC study found that fuel pump systems could seize up or otherwise be damaged by higher content ethanol fuel, not to mention the malfunction of the check-engine light. The stakes are high for consumers who could be left stranded on the roadside and/or stuck with potentially expensive repair bills.

The legislation also reverses decades of EPA precedent and substantive Clean Air Act protections, while failing to comprehensively reform the broken RFS. We urge lawmakers not be distracted and to reform the RFS.

Finally, this is not an ethanol verses oil issue; it’s about providing fuels consumers want and need. Drivers have made it pretty clear that they’re not interested in higher ethanol blends. The proof of this is in the demand numbers: E85 makes up less than one tenth of one percent of gasoline demand, while demand for E0 – clear gasoline with no ethanol – was about 4 percent of gasoline demand in 2015. 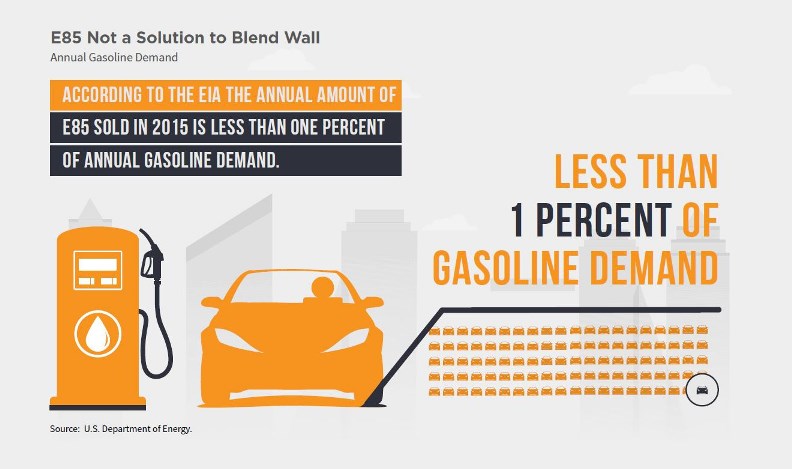 In addition, restaurant and grocery associations, automobile manufacturers, and producers of poultry, pork, and beef are just a few of the groups speaking out against the problems associated with this broken mandate.

While the RFS mandate was revised in 2007, fuel imports and costs were on the rise, making the mandated use of corn-based ethanol seem to some like a viable option. Then the American energy renaissance took hold, catapulting the United States to a position as the world’s leading oil and natural gas producer and refiner. In the last few years, petroleum consumption derived from imports reached its lowest level since 1970.

The primary goals of the RFS have been achieved, not by ethanol mandates but by market forces and technological innovations, leaving this policy with very real costs and very few benefits.

The energy landscape has shifted, but ethanol policy under the RFS remains stuck in the past.  And American consumers could pay the price. Protecting consumers from outdated, unreasonable ethanol mandates should be a top priority for Congress in this session.