North Carolina: Stock Car Racing and the Energy to Roar

Ah, NASCAR and North Carolina. They’re like a fantastic couple on a fine summer day: close, warm and comfortable. Their easy relationship surely reflects stock car racing’s deep roots in the Tar Heel State – based on innovation and energy-driven technologies, resulting in pure, heart-pounding excitement. Energy makes it so – in the materials, components, fuels and more that thrill racing fans all across the country.

You can examine stock car racing’s history at the NASCAR Hall of Fame in downtown Charlotte, not far from the famed Charlotte Motor Speedway. Long before Richard Petty, Jeff Gordon and Dale Earnhardt (senior and junior), speed was the name of the game in these parts. In the 1920s and 30s, mountain bootleggers were beefing up the engines of their coupe sedans – you know, for the quick getaway. North Carolina native and legendary NASCAR driver Junior Johnson chose a 1940 Ford with a flathead V8 that he supercharged himself for some extra giddy-up while delivering moonshine. Johnson, from an article on motor1.com:

“We didn’t back down in doing whatever we could do to make them cars faster,” he said in a 2006 interview for Hot Rod. “You didn’t have no top end on ‘em with a supercharger. That thing would just keep gettin’ up. It had the power to take it where the road was so narrow, you couldn’t imagine how fast that thing was a-runnin’.”

Realizing the opportunity for some fun, bootleggers began racing each other. And while those days are far removed from today’s fuel-injected engines, they planted the seeds for the founding of the National Association for Stock Car Auto Racing (or NASCAR as it is more commonly referred to) in 1948 and, ultimately, to racing that plays out at Charlotte, Daytona and other modern tracks.

Coupes, Hornets and Taurus – Oh My!

Race cars have changed a lot since NASCAR’s founding, with iconic brands helping to mold its various eras, with energy playing a key role. From Ford Coupes to Hudson Hornets in the ’40s and ’50s to the enhanced stock cars used today, energy has helped advance racing through the years. 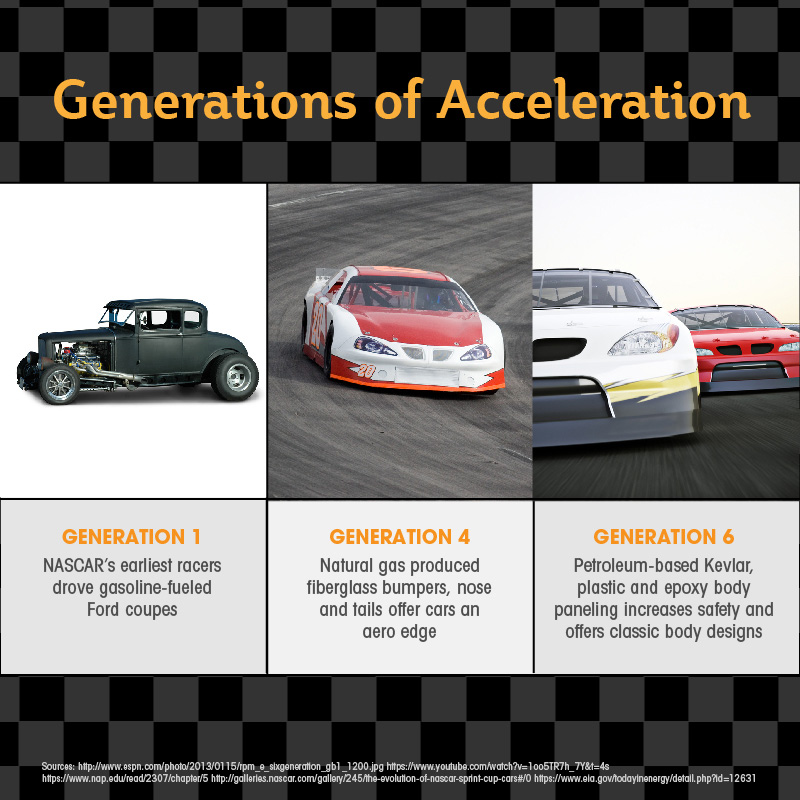 Generation 4 models, like the Ford Taurus and the Dodge Intrepid that ran from 1992-2006, used fiberglass to build their signature noses, tails and bumpers. Fiberglass production relies heavily on natural gas to make sure the different composites are melted and ready for fiberization.

And Generation 6 stock cars, those found on the tracks today, are shaped to be aerodynamic and uniform across the competition, not allowing for unfair advantages. Strips of carbon fiber and Kevlar, a byproduct of petroleum, are coated in epoxy, processed and baked until the fibers combine, allowing a race car’s body to take form.

No Pit Stops on This Road Trip

The cars aren’t the only pieces of the puzzle that have come a long way. Constant innovation in fuel blending helps drivers race more efficiently, stay out of pit stops, and race longer and faster. Cars are powered by racing engines – definitely not those in the average American family’s minivan – that are specifically designed to use Sunoco’s Green E15 fuel – gasoline with up to 15 percent ethanol content.

Car tires have evolved, constantly adapting to handle NASCAR racing surfaces, most of them paved with asphalt, another petroleum product. Companies including Goodyear produce tires with multi-zone tread technology, which is composed of two different tread compounds that allow tires to grip a new track while flying through a curve and throttle down when pulling into the pits. Synthetic rubber, a key component in these multi-zone tires, is manufactured from butadiene and styrene, which are produced from refined petroleum. About 12 sets of tires are used per pit team every race. Research and development is big in a sport that maintains a high focus on safety regulations. The development of features like helmets made with polystyrene and fire-retardant suits produced with Nomex have revolutionized safety in NASCAR. Thanks to petroleum, polystyrene and Nomex provide drivers with the gear to keep their minds at ease when tearing up the asphalt.

NASCAR isn’t planning on slowing down its innovation initiatives. Its Research & Development Center opened in 2009 in Concord, N.C. The center works on features that will help improve safety and performance. Projects currently in development include energy absorption technology and improved car chassis.

This isn’t granddaddy’s stock racing league. Today’s professional drivers don’t have night jobs, and the vehicles they pilot around tracks aren’t borrowed from the family garage. Natural gas and oil and products derived from them are helping make today’s NASCAR modern, more efficient and safer for the racing teams and fans who enjoy watching them.