At the very top of EPA’s Renewable Fuel Standard website, you’ll find this description of the program devised by Washington in 2005 and expanded in 2007:

No question, the RFS was well-intentioned. But more than a decade later, here’s what we know about those top-line objectives set out by Congress:

With EPA receiving public input this week on its proposed ethanol-use volumes for 2018, it’s important to see that America’s energy renaissance in natural gas and oil production is the biggest reason for the progress the U.S. has made toward those RFS objectives. Two charts: On crude imports, while ethanol production has increased since 2008, the increase in domestic oil production more than accounts for the decrease in net crude imports over the same period:

As for emissions, levels of carbon dioxide associated with electricity generation are near 30-year lows, primarily because of increased use of cleaner-burning natural gas:

While the United States has made important climate progress and increased its energy security largely apart from RFS contributions, the RFS itself continues to have difficulties that could impact consumers and the overall economy. Frank Macchiarola, API downstream group director (pictured below), described some of these in remarks at EPA’s public hearing in Washington.

As has been true in recent years, ethanol volumes proposed by EPA for next year could force more ethanol into the nation’s fuel supply than can be used as E10 gasoline, which is standard across the country. That would be a breach in the refining “blend wall.” According to one study, refiners, with their backs to the blend wall, could comply with the RFS by decreasing the volume of fuel supplied to the domestic market, potentially causing increases in transportation fuel costs that could ripple throughout the economy.

EPA’s proposal exceeds 9.7 percent ethanol in the gasoline pool. That’s problematic, because some room is needed below the 10 percent level to account for the difficulty of blending ethanol into every gallon of gasoline, to ensure a stable market for the federal credits refiners receive for each gallon of ethanol they blend, and to preserve a market for consumers who choose ethanol-free or E0 gasoline. Macchiarola:

“The ethanol blend wall is a real constraint on today’s fuel supply system that makes the statutory volumes (under the RFS) unattainable, and limits the use of ethanol below 15 billion gallons. … Strong consumer demand for E0 continues to exist, and EPA should work with EIA (U.S. Energy Information Administration) in predicting its actual demand to ensure that consumer ability to choose E0 is preserved in the marketplace.”

While some argue that pushing increased volumes of the two higher-ethanol fuels will fix the blend wall problem, market realities say otherwise. Motorists aren’t sold on E85, and fuel economy is a big factor. Check the Energy Department’s fuel economy website, and you’ll see that vehicles get fewer miles per gallon of E85 than they do E10 gasoline. That’s because ethanol contains about one-third less energy than gasoline, DOE says, which means flex-fuel vehicles operating on E85 get about 15 percent to 27 percent fewer miles per gallon than E10 gasoline.

Studies have shown using E15 in vehicles that weren’t designed to use it could damage engines and fuel systems.

EPA presumes demand for these blends will drive total ethanol volumes to exceed 10 percent of gasoline supply in 2018.  History demonstrates that motorists have largely rejected E85 ... It is unreasonable for EPA to assume any significant near-term ethanol volume increases from E15 or E85.  EPA’s unrealistic market scenarios fail to account for the significant retail investments that are needed, particularly when only 8 percent of vehicles on the road were designed to use E85, and only about 15% (including FFV’s) were designed to use E15. 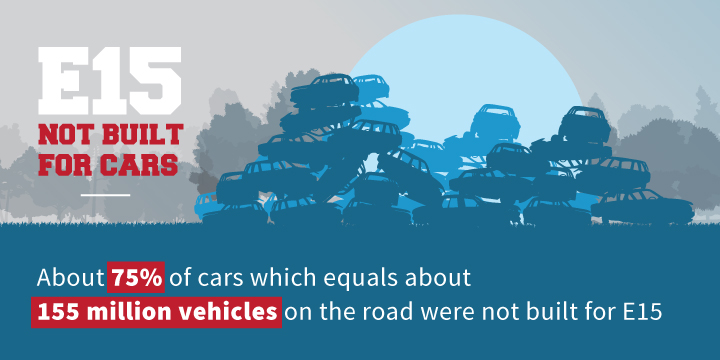 Serious vehicle and retail infrastructure compatibility issues continue to exist with gasoline containing more than 10 percent ethanol.  Gasoline demand increases projected at the inception of the RFS did not materialize, nor did the commercialization of cellulosic biofuels.  The ethanol blend wall is a real constraint on today’s fuel supply system that makes the statutory volumes unattainable, and limits the use of ethanol below 15 billion gallons.

EPA should heed these kinds of concerns – especially in the context of a Washington-knows-best program that has been left behind by domestic energy production and changes in the fuel marketplace. EPA’s latest ethanol volume proposal – reducing volumes from unattainable levels set out by Congress a decade ago – is the right move but more is needed. Macchiarola: