The past week or so we’ve talked a lot about how natural gas and oil help Americans power past the impossible – meeting the challenges of today and building a path to a better future. See API’s 2018 annual report, check out our keynote video and listen to API President and CEO Jack Gerard’s State of American Energy remarks. All point to the positive momentum for our nation provided by secure, abundant energy.

Now, how do we keep it going?

“Now is the time to increase access to offshore energy resources, not take them away. We hope the administration will continue to embrace a holistic approach to offshore energy development and continue to pursue energy policies that are focused on the consumer and on the economy – guided by facts and mindful of the industry’s strong record for responsible stewardship of our natural resources.”

Gerard said offshore operations are safer now than ever before, noting that since 2010 more than 100 industry standards were created or strengthened to improve safety and environmental performance. A complete, forward-looking offshore leasing program creates opportunity for natural gas and oil development instead of shelving it. All of America’s offshore options need to be available. Gerard:

“The Gulf of Mexico is the backbone of our nation’s offshore energy production. Restricting access to the Eastern Gulf will put hundreds of thousands of jobs at risk across the country and along the Gulf Coast – particularly in Florida, Louisiana, Alabama, Mississippi and Texas.”

Yet, these important energy gains could be at risk if NAFTA's energy-strengthening provisions aren't maintained. Gerard:

“NAFTA has helped to make North America a global energy leader by creating a more efficient flow of energy, capital and talent across all of our borders. American energy abundance in conjunction with the energy resources from Canada and Mexico continues to provide an important buffer from foreign energy supply disruptions that in previous decades would have disrupted supply and destabilized energy costs.”

Abundant, affordable domestic natural gas is driving its own renaissance within the broader U.S. energy renaissance – one that benefits consumers and the environment while helping launch a resurgence in domestic manufacturing.

It’s critically important that consumer choice be allowed to shape the markets – as opposed to government interventions – so that Americans in all parts of the country can enjoy the full benefits of natural gas. Indeed, as Gerard said, the good-news story of U.S. natural gas underscores the importance of “sound energy policy that embraces U.S. global energy leadership.”

Gerard, who announced this week he will step down from leading API later this year, encouraged the nation’s energy leaders gathered for the USEA event to stay focused on securing America’s energy future, which he said will depend in large part on developing a next-generation energy workforce:

“Impossible is just a word, not a barrier. Our industry is focused on achieving what was once thought impossible, to ensure that future generations enjoy a standard of living that none of us in this room can yet imagine today. To do that we’ll need to attract and retain the best talent of the next generation. In the coming decades the natural gas, oil and refined products industry is estimated to have as many as 1.9 million job opportunities. A recent study says that women and minorities will fill nearly 40 percent of those positions, an increase from today. More important, we expect that the contribution of Millennials, who make up one-third of the oil and gas workforce currently, will continue to grow.”

A new API report estimates Millennials will account for nearly 41 percent of the natural gas, oil and petrochemicals industries by 2025. For industry, it’s a great opportunity to better reflect the country’s makeup, a focus that also includes increasing the presence of women and minorities in the workforce. Gerard said industry needs Millennials’ unique worldview to advance its goals and serve the nation:

“We’ll need to harness their unshakable confidence in a better future and use of technology to address tomorrow’s greatest challenges. Their diversity – 45 percent identify as Hispanic, African American or with some other minority group – is one of their greatest attributes. As the most diverse generation in American history, they have raised new ideas and different perspectives in a way that will drive innovation.” 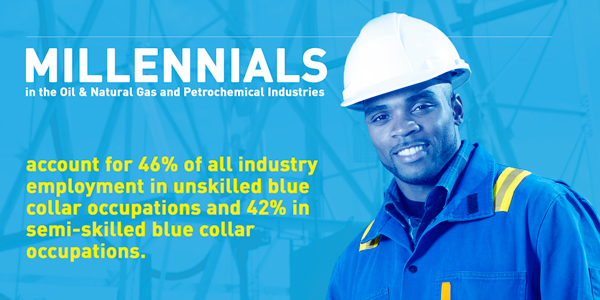