CERAWeek Update: The Case for Petroleum

On Oil Day at the IHS CERAWeek conference, some big names affirmed the relevancy of natural gas and oil, to the United States and the world, for the foreseeable future – with the president and CEO of Saudi Aramco pushing back a little against those who argue that the world should abandon oil and natural gas for alternative energies. CERAWeek highlights:

The Relevance of Petroleum

Saudi Aramco’s Amin Nasser noted that 99 percent of passenger vehicles in the world today have internal combustion engines and that even with the growth of electric vehicles, there still will be a need for fuel to generate the electricity to run them. Nasser offered a reality check: The issue of emissions, he said, is simply being moved from “tailpipe to smokestack.”

Over the next few decades, Nasser said the penetration of alternative energies will vary greatly between the developing and developed world. By 2050, 2 billion more people will be living on the planet, and the demand for energy will continue to grow. Nasser:

“There will be fierce competition among various technologies. By contrast there will be continuous healthy demand for oil in most existing sectors. … In other words, I’m not losing any sleep over ‘peak oil’ demand or stranded resources. Oil and gas will continue to play a major role in the world. All energy sources will be required for the foreseeable future.” Neat Projection of the Day

Bet you can’t guess what’s in this image: 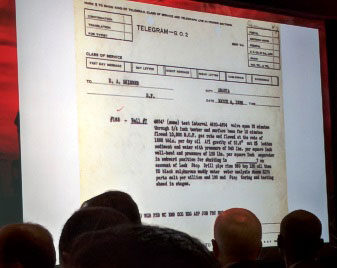 It’s a piece of history. Before Saudi Aramco’s Amin Nasser spoke, CERAWeek host Dan Yergin displayed this picture of the telegram that was sent 80 years ago, advising of the first oil strike in Saudi Arabia.

“We put everything on [the table], almost in a zero-based way so that all Americans see the potential offshore, knowing that we would talk to the governors, talk to local communities and that we would shape it to reflect the interests of the local communities and the states. But by putting everything on and looking at the five-year plan we were able to say, ‘America, this is the energy potential.’”

Zinke said Interior is working hard to restructure itself – including updating some features that are holdovers from the department’s inception, more than 150 years ago – to reach the administration’s goal of holding the federal infrastructure approval process to a year. He credited industry technology and innovation for driving the ongoing U.S. energy renaissance:

“You can’t get to 10.6 million barrels [a day] without American innovation and persistence. You can’t get to … for the first time in 60 years we’re exporting liquid natural gas without this industry. So I want to thank you for making American energy great again.” 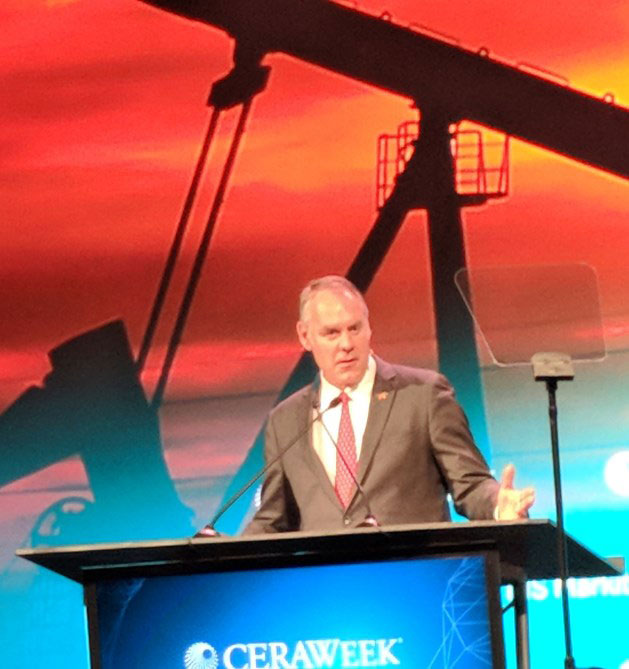 The U.S. could become the world’s biggest crude oil exporter besides Saudi Arabia, thanks to surging production in shale plays such as the Permian Basin. So said IHS Markit’s Aaron Brady. He estimated U.S. crude exports could reach 5 million barrels per day in the mid-2020s. Growing shale production and a refining sector that’s already absorbing as much light, sweet crude as it can handle will boost exports, he said. Brady:

“As long as U.S. production continues to grow, U.S. crude exports are going to get bigger and bigger. Under the right circumstances the U.S. could be a bigger crude oil exporter than just about any other OPEC country other than Saudi Arabia in the next 10 or so years.”

“It’s just a fantastic time to be in the energy business in the United States. The U.S. is going to be a dominant force, not just in crude, but in LNG and LPG and in chemicals. So, anywhere you have the opportunity to get into the business of exporting there’s going to be opportunity.”

Shale Quote of the Day

“Low oil prices are not going to kill shale, it’ll just put it into hibernation.”

“The danger is in building business models that are only good for one season. We need them … for all seasons. … We don’t know the future.”