The CERAWeek conference turned its attention to the nation’s electricity system, with lots of talk about renewables, power storage, wholesale markets and the like. Most interesting was Federal Energy Regulatory Commissioner Rob Powelson’s calling out of states that have adopted or are considering anti-natural gas policies. Check it out below in my latest CERAWeek update.

Powelson: Get Natural Gas to Markets

Rob Powelson, who joined FERC last year, affirmed the long-range role natural gas must play as a fuel for electricity generation and in efforts to decarbonize the power sector. Powelson minced no words in talking about states that are rejecting new natural gas infrastructure:

“My view, coming from Pennsylvania, regulating Marcellus development – I mean, here’s Marcellus in 2007-8 (producing) 2 to 3 Bcf (billion cubic feet) per day all the way up to 15 to 17 Bcf a day, liquids flowing to East Coast refineries now and customers benefiting from 60 percent wholesale power reductions, LDC purchase cost reductions, reindustrialization. If you had told me an ethylene cracker was going to be built in Beaver County Pennsylvania a decade ago, nobody would have fathomed it.

“There are states that have adopted policies that are not supportive of natural gas infrastructure expansion. At the end of the day you don’t have to have an MBA from Wharton Business School to understand that if we’re going to have a conversation about market-based decarbonization and (an increase in) renewables, gas has got to be part of that equation.”

Powelson said consumers continue to be impacted by such policies:

“I know we have things like fracking bans and we don’t want pipelines. Let’s use my example of New England … 15 million customers in New England who are less than 200 miles from … gas in Pennsylvania are still being negatively impacted … because of gas constraints. It is alarming. And because of the goals of the states that want to reduce (greenhouse gases), they’re not building coal plants, they’re dealing with increasing renewables … they need to get gas into their market. Storage is great when there’s adequate storage facilities, but that is not a reliable long-term solution to the energy market and specifically the New England market.” 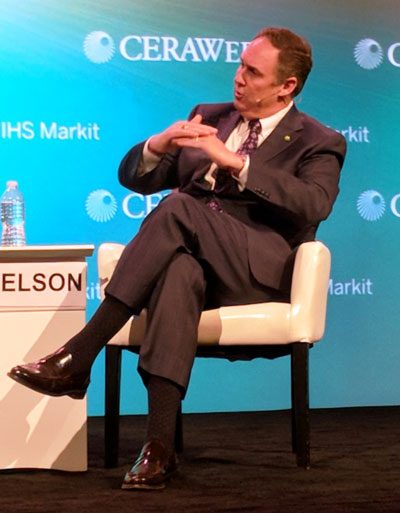 The challenges facing ISO New England because of natural gas infrastructure constraints are pretty well known (see here and here). Gordon van Welie, president and CEO of ISO New England, the region’s grid operator, has been quite public about these challenges and continued to talk about the need for more natural gas in the region to partner policies driving increased use of renewables. 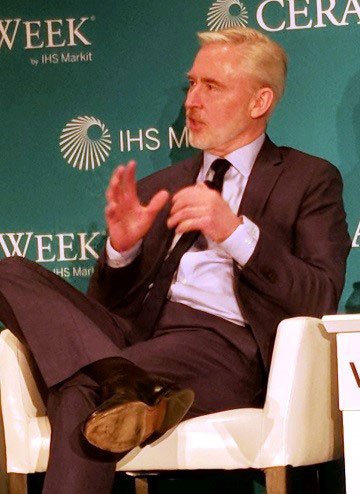 “You’re going to have (more) renewables because that’s what you need to decarbonize. … Then you’re stuck with, what’s the balancing energy source? Storage is the holy grail, but it’s limited at the moment based on the technology to really short, sharp injections into your system. So you need an energy source … that can fill in behind the renewables.”

That would be natural gas. Except if you’re New England and – as Powelson said above – policy is getting in the way of practical, reliable, affordable energy for consumers.

An interesting panel discussion of storage for power systems on Thursday, with panelists expressing a good deal of optimism about battery technologies that would provide a storage solution for intermittent fuel sources such as solar and wind. Kurt Kelty, formerly with Tesla and now with an urban agriculture-growing concern called Plenty, offered one yellow light: Will there be enough batteries to go around?

Kelty suggested that if electric vehicles grow as a number of people expect, competition for batteries from car manufacturers, who likely could pay higher prices for the technology, could leave power providers on the outside looking in. “I don’t know where all these batteries are going to come from,” he said.

Another caution: The supply of cobalt that goes into lithium ion batteries can be constrained (about 60 percent of the world’s cobalt comes from the Democratic Republic of Congo, which is known for being difficult to deal with). Stay tuned.

Some of the day’s other Twitter activity from CERAWeek: