American consumers take a keen interest in energy prices, for the health of their pocketbooks as well as their livelihoods and security. More than 10.3 million people directly or indirectly support the industry, and tens of millions more people own or work for businesses that depend on having abundant and affordable energy.

What happens in energy markets also is important to our business literacy and understanding of how the United States’ role in global commerce has evolved thanks to the energy renaissance. Not so long ago, many energy-intensive U.S. industries were hollowed out as jobs moved offshore. Thanks to American innovation, today the high availability and low prices of natural gas, natural gas liquids (NGLs) and oil have stimulated demand and investment while also helping to improve efficiency and return energy-related CO2 emissions to near their 25-year lows.

API’s Monthly Statistical Review (MSR) is the most timely source for current data about the state of U.S. oil and NGL markets. The March edition gives compelling details about how many preconceptions of U.S. energy – things that were thought to be impossible just a few years ago – have repeatedly been blown away.

For example, the conventional wisdom ten years ago was that the United States was running out of natural gas and oil. But in March 2018 the U.S. produced a new record of 10.4 million barrel per day (MBD) of crude oil plus another 3.9 MBD of NGLs. As strong as supply has been, however, voracious demand growth outpaced it. U.S. petroleum demand of 20.6 MBD achieved its highest levels since 2007. The proverbial April surprise was that the U.S. drilling rig count eclipsed 1,000 for the first time since April 2015 and has positioned the U.S. for further supply growth. Here are other interesting highlights from API’s MSR for March. U.S. petroleum demand sustained its highest levels in 11 years – U.S. petroleum demand, as measured by total domestic petroleum deliveries, was 20.6 MBD in March, which was the strongest March monthly demand since 2007. Through Q1 2018, U.S. petroleum demand averaged 1.0 MBD above that of Q1 2017 despite higher prices, which is a testament to underlying U.S. economic strength. Among major refined products, kerosene jet fuel stood out with deliveries in March that rose by 11.0 percent from February and 6.5 percent compared with March 2017 to reach 1.8 MBD – an 18-year high underpinned by strong air travel demand.

Additionally, liquid petrochemical feedstocks, naphtha and gasoil – “other oils” – demand of 5.3 MBD rose by 2.6 percent from February and 20.5 percent compared with March 2017, which suggests that strong refining and petrochemical activity has continued. 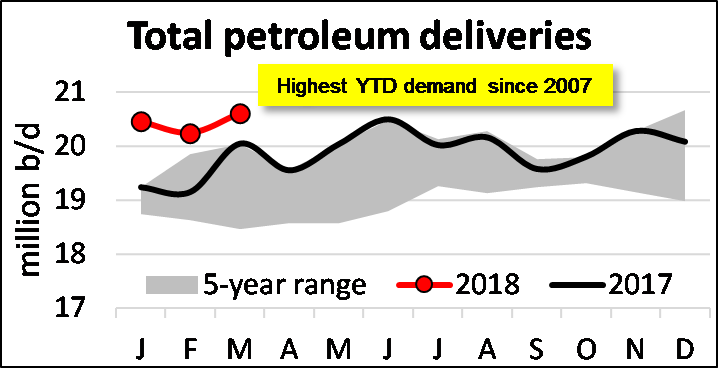 U.S. petroleum inventories rose.  In March, total crude and refined product inventories were down 4.9 percent compared with March 2017 but rose by 3.4 percent from February. Within the total, crude oil stocks were up by 0.4 percent m/m. 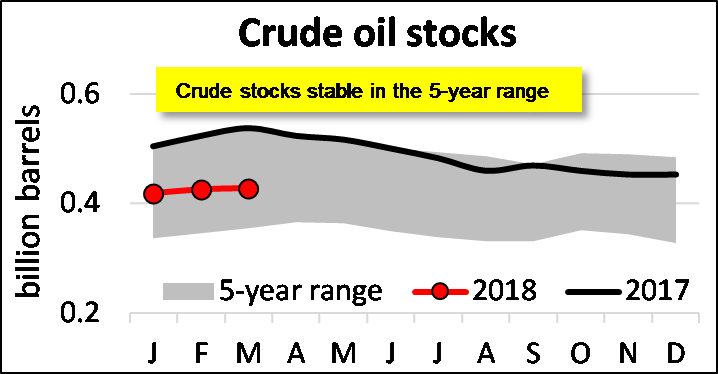 Crude oil prices buoyed by strong global demand and a weaker U.S. dollar. Domestic WTI crude oil prices averaged $62.73/Bbl. in March, up by 0.8 percent from February and 27.2 percent versus March 2017. Meanwhile, international Brent crude oil prices increased by relatively more – 1.1 percent m/m in March to $66.02 per barrel – which is a sign that the global economy and oil demand remained strong. Multiple coincident and leading indicators corroborate the economic strength at home and abroad, which has spurred a virtuous cycle of U.S. petroleum demand, production and exports that in turn have helped to reinforce prices and motivate even greater infrastructure investment and U.S. drilling activity.

All together, the strength and resilience of U.S. energy markets possibilities for consumers and businesses in the U.S. and across the world.

API’s MSR is produced from API’s Weekly Statistical Bulletin (WSB), which since 1929 has been a go-to information source on natural gas and oil industry statistics. The WSB is available via subscription only. Click here for more information.

Dr. R. Dean Foreman is API’s chief economist and an expert in the economics and markets for oil, natural gas and power with more than two decades of industry experience including ExxonMobil, Talisman Energy, Sasol, and Saudi Aramco in forecasting & market analysis, corporate strategic planning, and finance/risk management. He is known for knowledge of energy markets, applying advanced analytics to assess risk in these markets, and clearly and effectively communicating with management, policy makers and the media.