The numbers are daunting. According to various estimates, 1 billion people on earth don’t have access to electricity and 2 billion don’t have access to reliable energy. Stanford University’s Mark Zoback told the World Gas Conference an estimated 3 billion people cook their meals using sticks, charcoal or dung for fuel. The health implications of that are scary. “If the challenge of providing sustainable energy to the developing world doesn’t intimidate you, you’re not paying attention,” Zoback said.

One of the benefits of U.S. energy abundance is the opportunity to look at ways American energy could benefit others. Domestic energy abundance means the freedom to choose to help others. That wouldn’t have been imaginable before America’s energy renaissance, when energy scarcity necessitated importing natural gas.

That’s fundamentally changed. Today, the United States is the world’s leading producer of natural gas and oil and a leading natural gas exporter. U.S. exports of liquefied natural gas reached 25 countries in 2017, according to the U.S. Energy Information Administration. Abundance is turning into opportunity.

Rachel Kyte, CEO and special representative of the United Nations secretary-general for sustainable energy, said 80 percent of the energy have-nots live in 20 countries, most of them in rural settings. Developing decentralized energy solutions is critically important, Kyte said, while also presenting a cleaner energy mix. Kyte:

“It’s a stain upon the energy world that we can think about our energy future when 40 percent of the world’s population cooks … knowing that (cooking) will imperil their children’s health.” 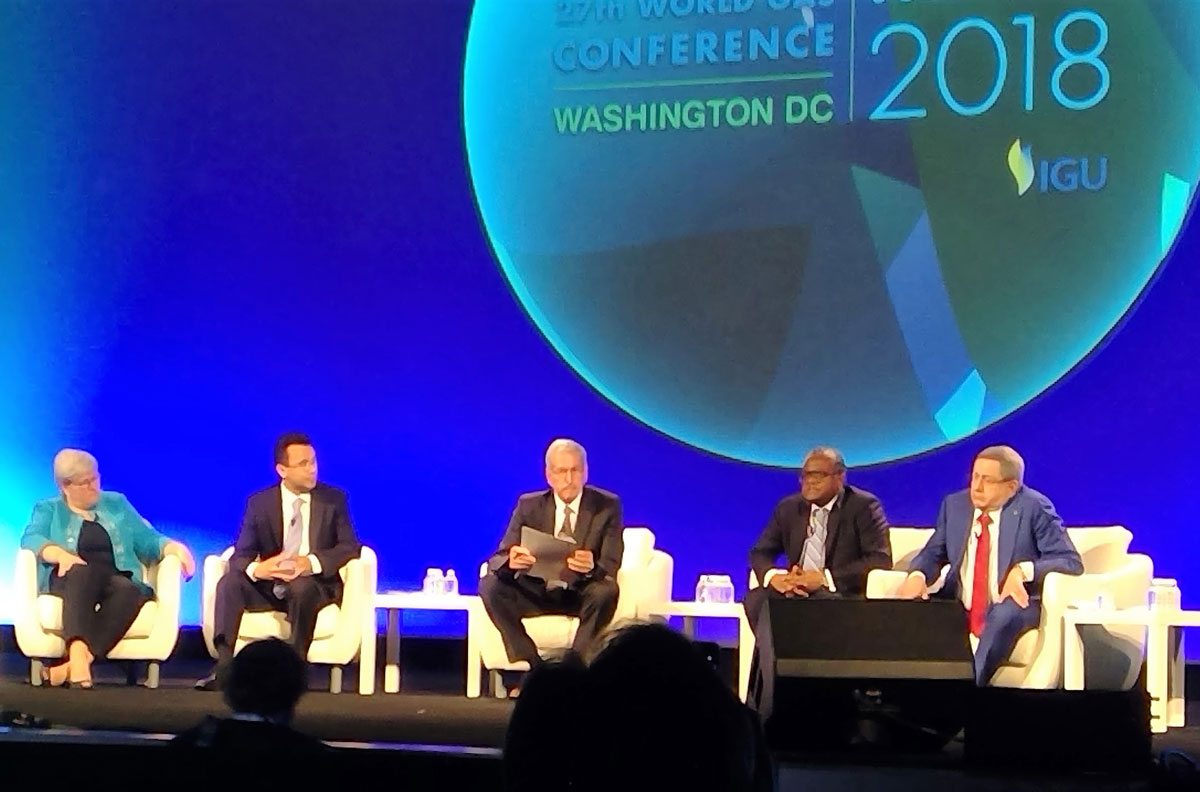 Certainly, clean, abundant natural gas has a key role to play in tackling the problem. Other panelists pointed to the need for energy infrastructure and transportation. Abdelmoumen Ould Kaddour, CEO of the Algerian energy company Sonatrach, said natural gas is available, but not yet available to everyone.

U.S. Lisa Murkowski of Alaska said now is time to see how natural gas can benefit others:

“It’s easy to forget the blessings that energy brings to our daily lives. … It’s easy to forget that there are so many people around the world living in worse conditions. … This is really the perfect moment to think about the way the U.S. can help contribute to the goal of universal access to energy.” Lightning Round: Investing in Innovation

A quick look at a discussion on the investing needs for the global natural gas industry, highlighting points made by panelists:

“We all have a responsibility ... to keep improving our operational performance. We have to come together to advocate for sound environmental policies to achieve sustainable results.”

U.S. Energy Secretary Rick Perry, touring the WGC2018 exhibition floor in the neighborhood of the Power Past Impossible booth: