Pretty neat animation by the Energy Information Administration, showing the growth of oil and natural gas production in the Bakken shale play between 1985 and 2010. You can see the locations and the yields of different wells within the Bakken in time-lapse fashion. EIA:

“Oil production growth in the Bakken shale play mirrors somewhat the growth in natural gas production in the Barnett play (Texas). Like the Barnett, the Bakken drilling and production animation … shows that drilling activity built up gradually and eventually led to rapid growth, particularly from 2006 to 2010. Production grew because of increased use of horizontal drilling and the addition of hydraulic fracturing, coupled with elevated prices for crude oil and other natural gas liquids.” 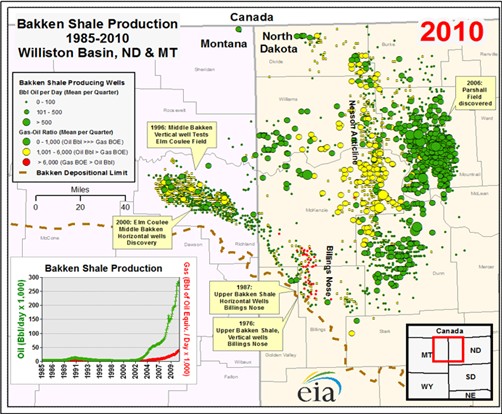 That last sentence is very important. Check the bar graph in the lower left-hand corner of EIA’s animation, which plots the blast off in Bakken oil production since 2006 – paralleling breakthroughs in hydraulic fracturing and horizontal drilling. The Wall Street Journal:

“The Bakken wasn't discovered so much as unlocked. The energy industry figured out that a combination of technologies—hydraulic fracturing and vertical wells that turn underground to run horizontally through oil-rich rock—could free petroleum and natural gas trapped in dense rock formations.”

Increased domestic production is the reason oil imports as a share of U.S. consumption fell to their lowest point in 16 years last year – a level that could drop more with increased access to domestic resources and continued development of America’s shale storehouse.

There’s no energy-from-shale revolution in the U.S. without a revolution in hydraulic fracturing and horizontal drilling techniques. Indeed, it’s impossible to be in favor of the energy benefits from American shale and opposed to fracking. Safely and responsibly done, hydraulic fracturing is redefining the extent of our oil and natural gas wealth. Just ask North Dakota.