API represents all segments of America’s natural gas and oil industry, which supports more than 11 million U.S. jobs and is backed by a growing grassroots movement of millions of Americans. Our nearly 600 members produce, process and distribute the majority of the nation’s energy, and participate in API Energy Excellence®, which is accelerating environmental and safety progress by fostering new technologies and transparent reporting. API was formed in 1919 as a standards-setting organization and has developed more than 800 standards to enhance operational and environmental safety, efficiency and sustainability.

Although our focus is primarily domestic, in recent years our work has expanded to include a growing international dimension, and today API is recognized around the world for its broad range of programs:

API’s mission is to promote safety across the industry globally and to influence public policy in support of a strong, viable U.S. oil and natural gas industry.

We speak for the oil and natural gas industry to the public, Congress and the Executive Branch, state governments and the media. We negotiate with regulatory agencies, represent the industry in legal proceedings, participate in coalitions and work in partnership with other associations to achieve our members’ public policy goals.

The natural gas and oil industry is unified in our commitment to accelerating safety and environmental progress across its operations, while meeting global demand for affordable, reliable and cleaner energy. Meeting this demand requires safe and responsible production, transportation, refining and exports. Under API Energy Excellence, API members commit to accelerating safety and environmental progress by adhering to 13 core elements that serve to continuously improve our performance as an industry. API members apply these elements to safeguard our employees, environment and the communities in which they operate.

API conducts or sponsors research ranging from economic analyses to toxicological testing. And we collect, maintain and publish statistics and data on all aspects of U.S. industry operations, including supply and demand for various products, imports and exports, drilling activities and costs, and well completions. This data provides timely indicators of industry trends. API’s Weekly Statistical Bulletin is the most recognized publication, widely reported by the media.

For more than 90 years, API has led the development of petroleum, natural gas and petrochemical equipment and operating standards. These represent the industry’s collective wisdom on everything from drill bits to environmental protection and embrace proven, sound engineering and operating practices and safe, interchangeable equipment and materials. API maintains more than 800 standards and recommended practices. Many have been incorporated into state and federal regulations and they are also the most widely cited standards by the international regulatory community.

Each day, the oil and natural gas industry depends on equipment to produce, refine and distribute its products. The equipment used is some of the most technologically advanced available in the search for oil and gas and allows the industry to operate in an environmentally safe manner. Designed for manufacturers of production, drilling, and refinery equipment, the API Monogram Program verifies that manufacturers are operating in compliance with industry standards. API also provides quality, environmental, and occupational health and safety management systems certification through APIQR. This service is accredited by the ANAB (ANSI National Accreditation Board) for ISO 9001 and ISO 14001. Let APIQR’s industry expertise certify your organization to API Spec Q1, API Spec Q2, API Std 18LCM, ISO 9001 and/or ISO 14001.

API also certifies inspectors of industry equipment through our Individual Certification Programs, designed to recognize working professionals who are knowledgeable of industry inspection codes and are performing their jobs in accordance with those codes. Through our Witnessing Programs, API provides knowledgeable and experienced witnesses to observe critical material and equipment testing and verification. API’s Training Provider Certification Program provides third-party certification for a variety of oil and gas industry training courses, further ensuring that any training provided meets industry needs.

For consumers, API provides the API’s Engine Oil Licensing and Certification System (EOLCS). It is a voluntary licensing and certification program that authorizes engine oil marketers who meet specified requirements to use the API Engine Oil Quality Marks. These emblems go directly on each container of oil that retains the certification for and is there to help consumers identify quality engine oils for their gasoline- and diesel-powered vehicles.

We are the problem-solvers who tackle the world’s greatest energy challenges—meeting growing demand, fueling economic growth and creating a better tomorrow.

To fulfill this responsibility, our members uphold the following principles:


To advance our members’ goals, API:

The American Petroleum Institute traces its beginning to World War I, when Congress and the domestic natural gas and oil industry worked together to help the war effort.

At the time, the industry included the companies created in 1911 after the court-imposed dissolution of Standard Oil and the "independents", companies that had been "independent" of Standard Oil. They had no experience working together, but they agreed to work with the government to ensure that vital petroleum supplies were rapidly and efficiently deployed to the armed forces.

The National Petroleum War Service Committee, which oversaw this effort, was initially formed under the U.S. Chamber of Commerce and subsequently as a quasi-governmental body. 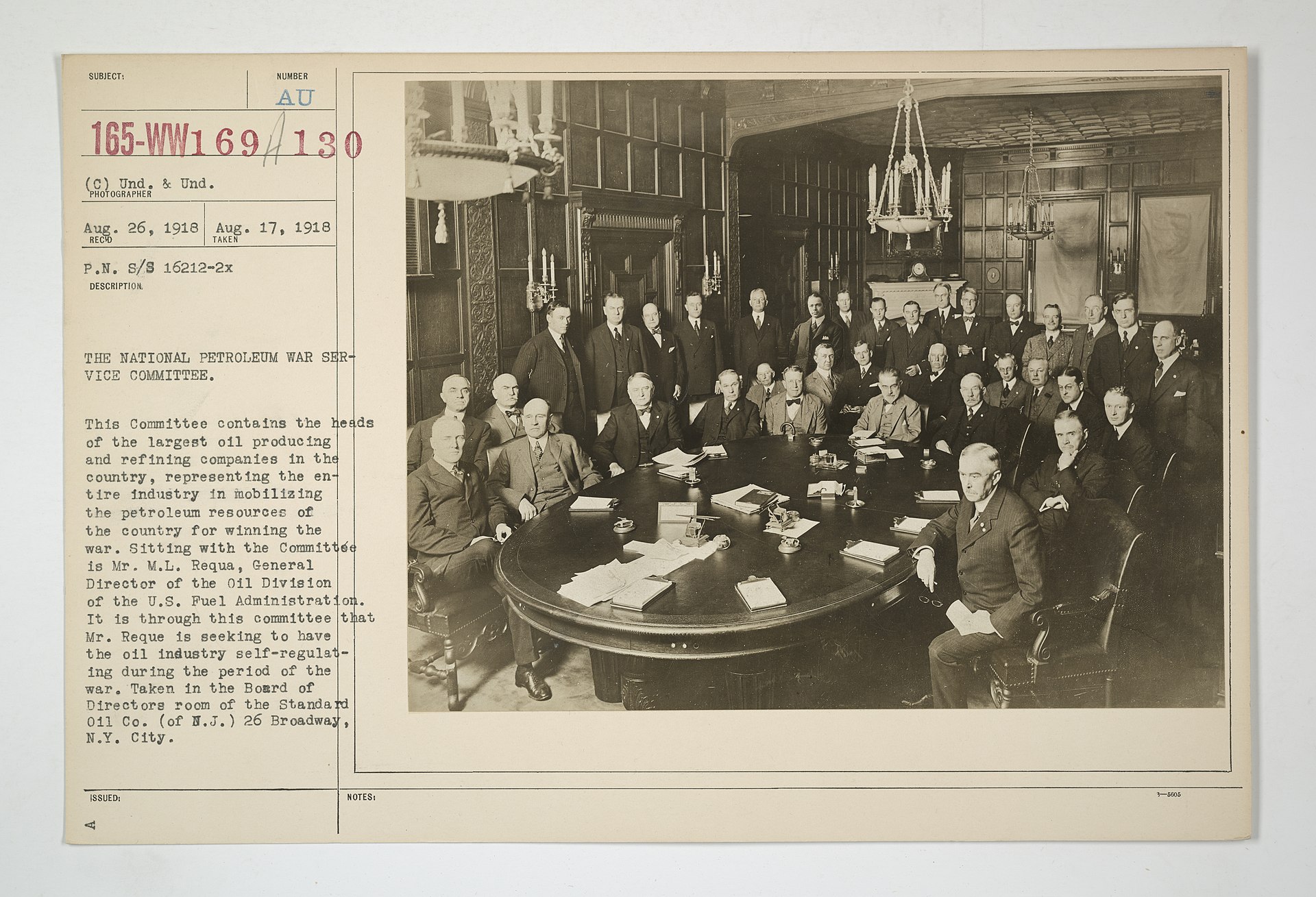 After the war, momentum began to build to form a national association that could represent the entire industry in the postwar years. The industry’s efforts to supply fuel during World War I not only highlighted the importance of the industry to the country, but also its obligation to the public, as the original charter demonstrates.

The American Petroleum Institute was established on March 20, 1919:

In late 1969, API made the decision to move its offices to Washington, D.C. where we remain today.

API is the only national trade association representing all facets of the natural gas and oil industry, which supports 10.3 million U.S. jobs and nearly 8 percent of the U.S. economy. API’s more than 600 members include large integrated companies, as well as exploration and production, refining, marketing, pipeline, and marine businesses, and service and supply firms. They provide most of the nation’s energy and are backed by a growing grassroots movement of more than 47 million Americans. In one generation, the United States has gone from steadily growing energy dependency to a nation that’s largely in control of its energy destiny. Natural gas and oil now drive the U.S. and world economies, and energy analysts project they will continue in that leading role for decades to come. This industry is changing our country’s narrative and altering its trajectory in historic terms, supplying the foundation for modern life and providing the fuel, power and products that make everyday life safer, healthier and more comfortable.

America’s natural gas and oil industry not only creates jobs, but also lifts entire communities, revitalizes manufacturing, strengthens U.S. security and develops the technology of the future; all while leading the charge in solving complex challenges.

That’s why the United States leads the world in both producing natural gas and oil, and in reducing greenhouse gas emissions. The old paradigm of energy and economic growth interlocked with increased emissions has been replaced. Today, growth and decreased emissions have occurred together. U.S. carbon dioxide emissions have plunged to their lowest level in a generation, while CO2 emissions around the globe have risen 50 percent since 1990.

This is where we are today. We are freer and more secure as a nation, able to plan for an optimistic future and global leadership because of abundant, secure domestic natural gas and oil.


While 2019 marks 100 years of the American Petroleum Institute and all that it offers to its member companies, what this milestone truly represents is 100 years of American energy innovation and achievement.

The U.S. energy industry has always been at the forefront of powering positive change – from supporting the war effort in World War I to the energy revolution that has made the United States the world’s leading producer, refiner and exporter of natural gas and the number one reducer of emissions.

Energy means everything to everyone. The natural gas and oil industry provides reliable and affordable energy to U.S. consumers, supports the creation of new technologies that we use every day, develops cleaner fuels, and exports energy that lifts developing communities out of poverty.

Energy is the key to improving health, security and opportunity for millions. And the United States is the world leader in meeting demand growth safely and cleanly both here and abroad. As we honor a century of industry-driven progress, we also look ahead to a future made safer, brighter and more prosperous for communities around the world by continued energy innovation.

Here’s to the next 100 years of energy leadership.