Perhaps only The New York Times could reduce the energy/economic miracle of North Dakota’s oil and natural gas bonanza to something akin to a toothache. Columnist Gail Collins ventures forth from the concrete canyons of Manhattan to discover the hubbub on the high plains and doesn’t avoid raising a skeptical eyebrow.

To her credit, Collins was able to confirm what lots of people already know: Oil and natural gas extracted from the Bakken Shale formation through hydraulic fracturing is practically evaporating unemployment in North Dakota , which has a jobless rate considerably lower than New York: 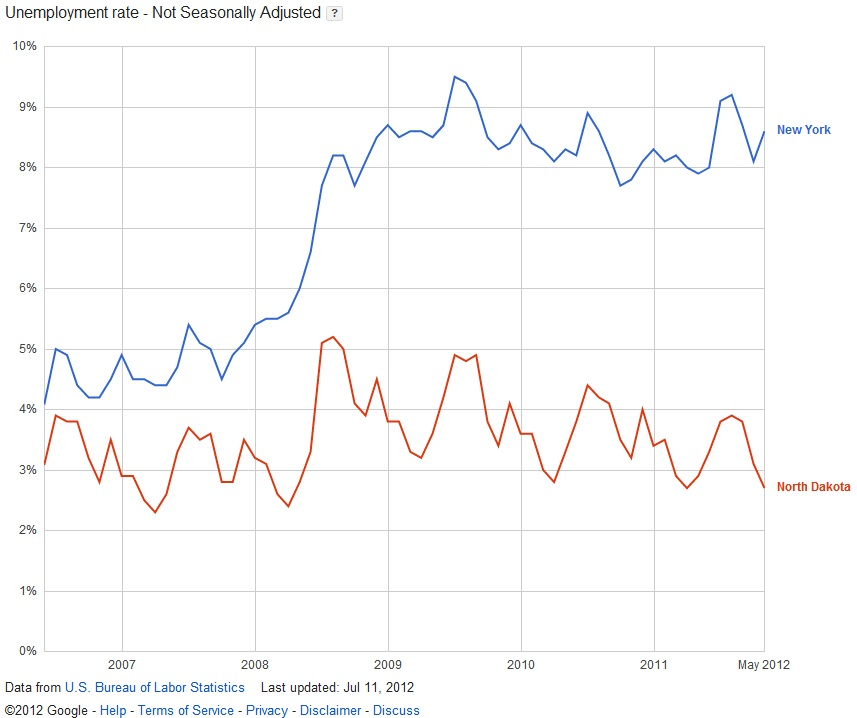 "If you did come, however, you would feel really, really wanted. Radio ads urged me to embark on a new career as a bank teller, laborer, railroad conductor or cake decorator. The local Walmart has a big sign up, begging passers-by to consider starting their lives anew in retail sales. The Bakken Region Recruiter lists openings in truck driving, winch operating and canal maintenance work, along with ads for a floral designer, bartender, public defender, loan officer, addiction counselor and sports reporter. All in an area where the big city has a population of around 16,000."

In other words, if you want to work it’s almost guaranteed you can land a job. But there’s a “but.” Collins describes the Bakken boom as filled with traffic, dust, man camps, bursting schools, long lines (as though waiting 30 minutes for a Big Mac is too much to pay for May’s 2.7 percent state unemployment rate) – while suggesting the most ambitious eatery in town probably wouldn’t impress many folks on the Upper West Side.

It’s true that strong economic growth creates many demands, and, as North Dakotan Rob Port regularly notes on his Say Anything Blog, state and local officials and support businesses need to do a better job seizing the opportunities. But Collins loses us – and perhaps credibility – describing the fracking used to extract oil and natural gas as “environmentally suspect.”

“In no case have we made a definitive determination that the fracking process has caused chemical contamination of groundwater.”

…basically repeating what she told Congress in May 2011:

“I’m not aware of any proven case where the fracking process itself has affected water.”

Collins may have turned in her piece before this came in, but on Wednesday the EPA removed suspicions surrounding hydraulic fracturing and well water in Dimock, Pa. – ground zero for those who claim fracking fouls drinking water. Regional Administrator Shawn M. Garvin:

“The sampling and an evaluation of the particular circumstances at each home did not indicate levels of contaminants that would give EPA reason to take further action. Throughout EPA's work in Dimock, the Agency has used the best available scientific data to provide clarity to Dimock residents and address their concerns about the safety of their drinking water.”

“We also find that there is no evidence to suggest that hydraulic fracturing itself is the cause of the increased rate of earthquakes.”

Bottom line: Collins may have environmental suspicions about shale energy and fracking, but a number of people paid to pay attention to such things don’t share them.