Fox Business News reports that because of surging shale energy development, overall oil production in the U.S. has become less susceptible to disruption from Gulf of Mexico hurricanes – even as the hurricane season officially opened over the weekend. Fox:

The U.S. is less dependent on production in the federal Gulf of Mexico, where hurricanes are more likely to cause disruptions. In 1997, 26% of the nation’s natural gas was produced there. By 2012, the Gulf of Mexico’s share fell to 6%. Oil production has also made a big shift to inland basins, thanks to booming shale plays in North Dakota and Texas.  The Gulf’s share of crude oil production in the U.S. narrowed to 19% last year from 26% in 2007 to 2011.Therefore, the impact of hurricanes on oil and natural gas production has been lessened by the shale oil boom taking place further inland.

Even so, America’s oil and natural gas industry remains committed to safety – the safety of its workers and facilities, as well as the environment – with the arrival of the hurricane season. According to government weathercasters, there’s a 70 percent chance of between 13 and 20 named storms in the Atlantic basin, seven to 11 of which might strengthen to hurricanes. Of that second group, three to six might turn into major hurricanes. Here’s a chart from the U.S. Energy Information Administration (EIA) showing the outlook range and the actual number of named storms and hurricanes 2003-2012 and the 2013 forecast: 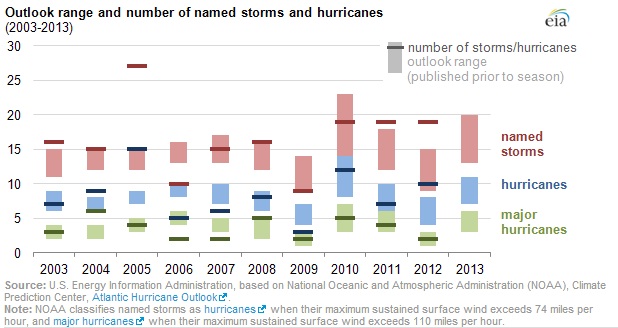 The graphic underscores the need for readiness. The states of Alabama, Florida, Louisiana, Texas and Mississippi have more than a half-million petroleum industry employees. Thus, API plays two primary roles in hurricane preparedness: (1) Helps industry better understand environmental conditions in and around the Gulf during hurricane season or tropical storm activity, to help make offshore and onshore facilities less vulnerable; (2) works with member companies, other industries and governments to prepare for hurricanes and return energy operations as quickly and safely as possible. Measures include:

Even with shale development’s impact, we’re still talking about significant levels of oil and natural gas production from the Gulf – and half of U.S. refining capacity is located on the Gulf Coast. The readiness activities above and more help protect lives and important national energy infrastructure, as well as the environment. For more information, see API’s hurricane information fact sheet.