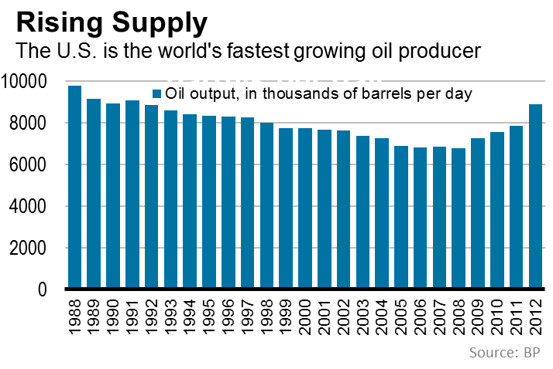 And another by AEI’s Mark J. Perry, providing historical perspective on changes in U.S. output: “On the supply side, the big phenomenon remains the American shale revolution – which led to another record-breaking year. U.S. oil and gas production grew faster than that of any other country – and for oil, the U.S. saw the largest increase ever.”

“The stats review also shows how outcomes often defy expectations when markets operate naturally. If you go back 10 years, you’ll find people worrying about the U.S. being addicted to energy imports, and today we’re headed toward energy self-sufficiency.”

“The growth in U.S. output was a major factor in keeping oil prices from rising sharply despite a second consecutive year of large oil supply disruptions.”

U.S. crude-oil production has raced ahead of new pipeline infrastructure to move it from oil fields to refineries. This has created regional gluts, such as in a major trading hub in Oklahoma, and driven down prices there. But it hasn't spilled over to depress global prices or deliver substantial amounts of cheap oil and fuel to consumers. The average crude price at a major benchmark hub in Europe last year was $111.67 a barrel, compared with $94.13 in Oklahoma. This could change as production rises and more pipelines are built—and as railroads move more crude around the country. "Growth in U.S. shale-oil production could have the most significant long-term impact on oil prices of any supply event in recent decades," noted a report from Pacific Investment Management Co., which runs one of the world's largest commodity funds.

Again, thanks to shale, thanks to fracking and horizontal drilling and thanks to an oil and natural gas industry that has made the investments to turn our shale potential into real energy, real jobs. This production growth is strengthening America’s energy and national security – and standing in the world. Ambassador Carlos Pascual, the State Department’s special envoy and coordinator for International Energy Affairs, speaking at this week’s Bipartisan Policy Center event on the impacts of U.S. tight oil:

“Oil and increasingly gas is a global commodity. Whatever happens in disruption of those supplies in those markets anywhere around the world is going to have an impact on global prices and it’s going to affect prices we pay in the United States, what you pay at the pump and the productivity of the American economy. It is fundamental to our economic interests and concerns. … We have the potential in North America to be a foundation for both oil and gas energy security for the entire world. … Because of this resource boom we have greater supplies for our own energy security, we can avoid disruption of supplies in the access that we have locally …”

The next chapter in this great-news story? Energy policies that sustain and build on the momentum reflected in BP’s review. These include increased access to U.S. reserves, offshore and onshore. It means common-sense regulatory policies and procedures for leasing and permitting that reward energy risk-taking and investment with stability and predictability. It means fair tax policies that foster investment. Combined, these will allow America’s oil and natural gas wealth to help grow our economy, create jobs and provide more revenue to governments.