E15 and Your Engine

In a blog post earlier this month Kristy Moore of the Renewable Fuels Association (RFA) took some shots at testing by the Coordinating Research Council (CRC) that showed higher levels of ethanol in fuel could damage the engines of millions of U.S. vehicles. A separate CRC study found that higher ethanol blends also could damage fuel pump systems, potentially leaving motorists stranded on the road and/or stuck with repair bills.

Obviously, both findings complicate RFA’s mission to increase ethanol use – which explains RFA’s cavalier dismissal of sound research and sound science, as well as its disingenuous defense of mandates in the Renewable Fuel Standard (RFS), which is forcing more ethanol on the public than is safe. It’s a photo of an impeller from one of the fuel pumps CRC tested on gasoline with higher levels of ethanol than the current standard grade that contains 10 percent (E10). A number of the impeller’s vanes have broken off – the result of jamming into the fuel pump’s housing, after the higher ethanol-blend fuel caused it to swell and expand. Such damage would cause the fuel pump to stop functioning, as well as the engine, and you know the rest – motorists on the side of the road. Meanwhile, CRC’s engine study found that fuel containing higher levels of ethanol could cause uneven wear and pitting of intake valve seats as well as widened exhaust valve seats and other problems. You know the rest – a date with the mechanic and potentially some big bills.

RFA doesn’t like this message, so it attacks the messenger. It doesn’t like the fact that CRC, which has been the gold standard in terms of vehicle testing for the better part of a century, determined that fuel containing higher levels of ethanol could damage millions of engines that weren’t designed to run on those fuels – the reason automakers, consumer safety groups like AAA, grocery manufacturers, environmental non-profits, think tanks, anti-hunger groups, the California Air Resources Board and lawmakers have expressed concerns.

Thus, Moore’s post. Let’s take a look at some of the questions she raised, with help from Coleman Jones of General Motors and Mike Leister of Marathon Petroleum, members of the CRC engine test project’s supervisory panel. For reference, below is the CRC engine test results table, which Moore highlighted in her post. 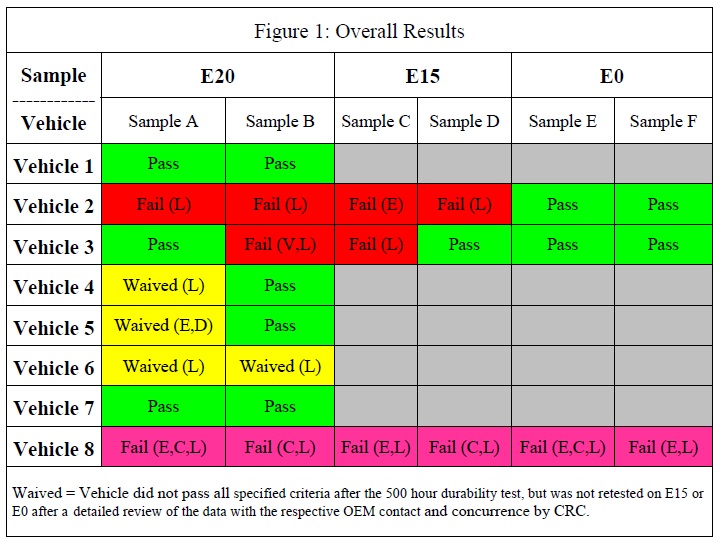 Why were only three vehicles tested on E0?

Jones: We tested on E20 first, if the vehicle passed we were confident that it would pass at all ethanol levels below E20, so no further testing was needed. This was an efficient and technically sound way to conduct this type of testing.

Why weren’t all the vehicles tested on E15?

Jones: For the same reason they weren’t all tested on E0 (see above).

Why wasn’t E10 used as a control test?

Leister: Because in their own testing, neither the Energy Department nor the Environmental Protection Agency used E10 as a control test.

Why were waivers granted in four instances in the E20 testing?

Jones: Final determination of pass/fail was done after the engine was disassembled and studied by the company’s experts who designed and built the engine, called the Original Equipment Manufacturer or OEM in the CRC report. We set very tight limits on the test results so that engines would go to the OEM for analysis if there was anything that was in any way suspicious. The term “waived” simply means that the engine was deemed a pass on E20 by the OEM. Waivers were granted by the OEM in cases where a vehicle triggered an inspection by the OEM, but it was determined during teardown by the OEM that there was nothing wrong with the engine. For final reporting purposes those vehicles were listed as passing on E20 and so weren’t tested further on E15 or E0. 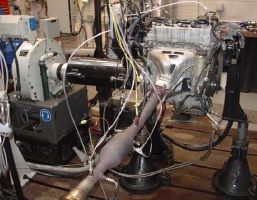 (Above, an engine setup for CRC testing)

What happened with Vehicle 8?

Jones: Vehicle 8 engines failed tests at E20, E15 and E0. Specifically, all failed the test’s leakage criterion. The test was run at an engine speed that later was determined to have been inappropriate for that engine’s design and which kept the engine’s valves from rotating normally. Accordingly, the overview results for Vehicle 8 were separated from the others. Even so, the teardown analysis conducted by the OEM revealed that the engines run on E20 and E15 showed higher wear and heavier pitting of the exhaust valves compared to the engine run on E0. This is all clearly explained in the CRC test report, which Moore failed to mention in her post.

Were a number of the vehicles used in the test under recall for relevant issues at the time of testing?

Was the Energy Department critical of CRC’s test protocol and if so, why?

Leister: DOE stated that CRC should have used E10 as a reference fuel, yet the department didn’t use E10 in its catalytic converter emissions testing program or in its evaporative emissions evaluation. Further, DOE didn't use E10 as a reference in its evaluation of marine engines. Meanwhile, EPA made it clear in their separate testing of ethanol’s effects on emissions control equipment that the reference fuel was E0. Bottom line: DOE didn’t like CRC’s results.

Was there anything unusual about the protocols for CRC’s engine test program?

Jones: Other than the fact the vehicles were run on fuels for which they weren’t designed or warranted, no.

What about the RFA claim that in CRC’s test the “vehicles were geared to provoke engine failure”?

Jones: We ran a test cycle to look for the effects of ethanol on engines. These effects are known from the development of E85 vehicles. In CRC’s engine test two of eight vehicle types, both of which were included in EPA’s 2010 and 2011 waivers, had issues on E20 and E15 and not on E0. Basically, EPA’s testing is irrelevant to a discussion of engine wear from elevated ethanol levels, because it was focused on emissions control equipment, not engines. Instead of attacking CRC’s testing, RFA should be applauding because CRC has identified problem areas for future research and development for use of higher levels of ethanol.

The current public discussion of the ethanol mandates in the RFS -- and the potential harm that could come to vehicle engines that weren’t designed to run on fuels containing higher levels of ethanol -- is important and should be fact-based. These points are salient:

The problems are real and won’t be solved if ethanol backers refuse to acknowledge them. API Downstream Group Director Bob Greco:

“The ever increasing ethanol mandate has become unsustainable, causing a looming crisis for gasoline consumers. We’re at the point where refiners are being pressured to put unsafe levels of ethanol in gasoline, which could damage vehicles, harm consumers, and wreak havoc on our economy. Congress must repeal the mandate. But there isn’t much time to get this done.  To protect consumers in the near term, EPA has the authority to reduce the mandate now.  This would immediately lessen the blend wall problem until Congress can act.”